“They always get held up,” says Johnson, “just because they look so suspicious.” 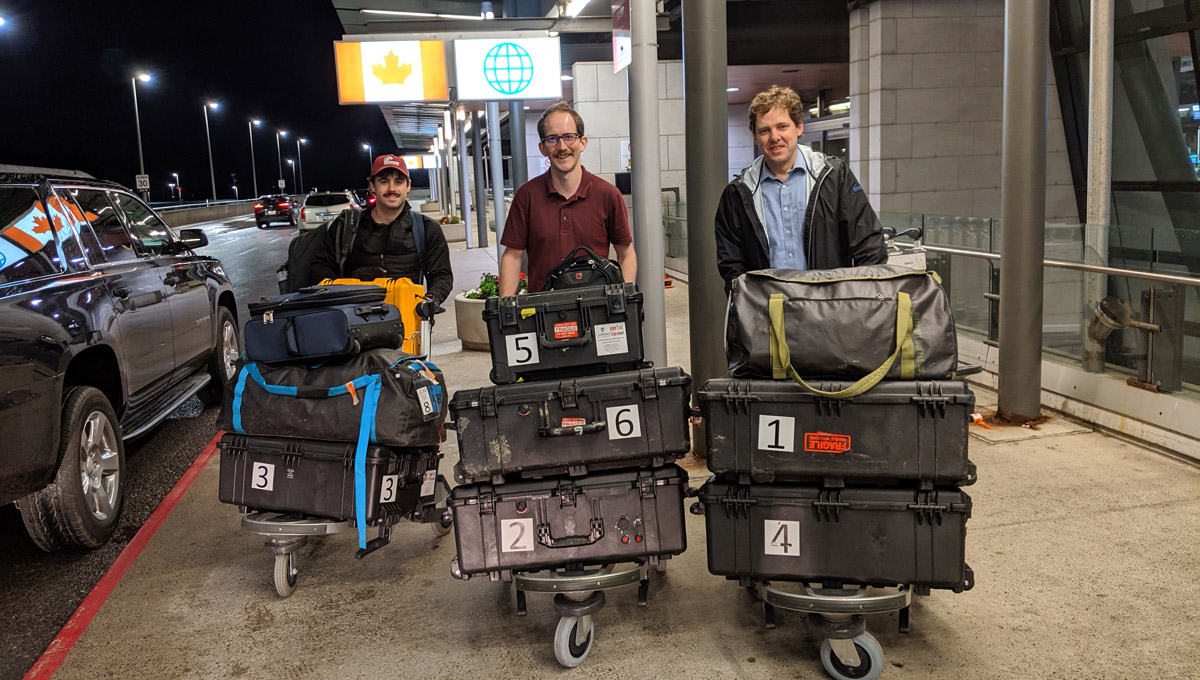 The FlareNet team at the Ottawa International Airport. Photo provided by FlareNet.

It was the first long day in a series of long days. The trio spent June 16 in transit: first flying to Toronto, then to Panama in Central America, then to Quito International Airport in the Andean mountains, almost 3,000 metres above sea level.

From the capital of Ecuador, the researchers then flew west to Coca and drove into the Amazon. As they drove through the jungle toward a base camp in Joya de los Sachas Canton, they passed graffiti on bus stops and soccer facilities which read: “Apaguen los mecheros.” Turn off the lighters. “Mecheros de la muerte.” Lighters of death.

“The communities want flaring to stop,” says Johnson. “And we really hope to enable that.” 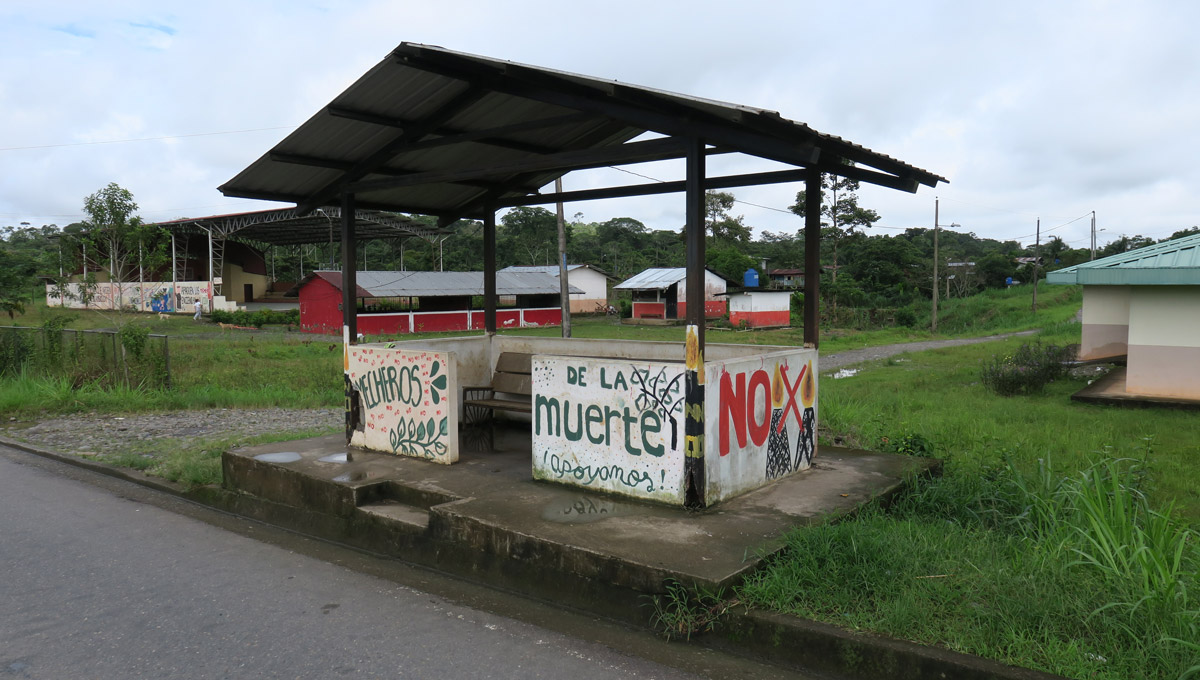 Armed with equipment and assisted by Ecuador’s state oil company, Johnson and his team went off in search of the lighters—flares at the end of gas pipelines—to find out what exactly was being burned.

Johnson, who is known for his experimental research methods for measuring emissions from oil and gas production, is the Canada Research Professor in Energy and Combustion Generated Pollutant Emissions. He is also director of the FlareNet Network—a group of researchers and academics from Carleton, four other Canadian universities, the National Research Council (NRC), and Natural Resources Canada (NRCan) who study pollutants from fossil fuel production. 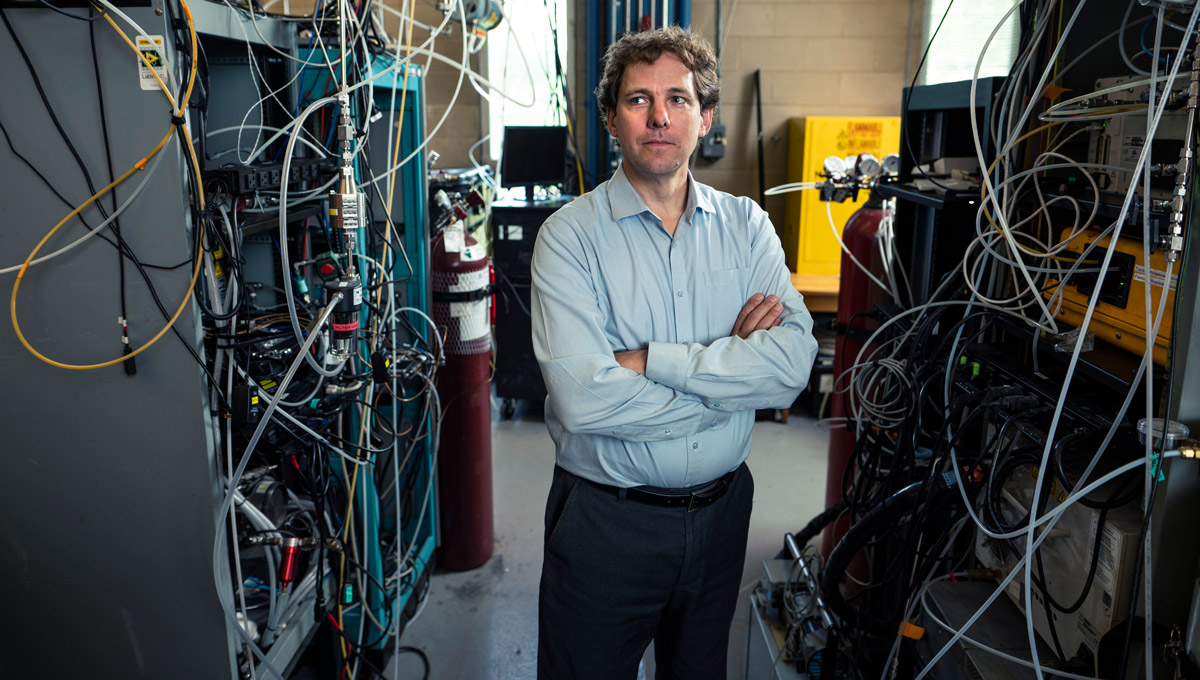 This work is closely aligned with the efforts of the World Bank, which is supporting Johnson’s work in Ecuador as it did previous FlareNet field deployments. The international organization’s Global Gas Flaring Reduction (GGFR) partnership launched its “Zero Routine Flaring by 2030” initiative in 2015 with the support of many governments, institutions and oil companies. One such company was Ecuador’s state oil exploration and production company, Petroamazonas EP, which hosted the Carleton researchers this summer.

“Oil and gas production is essential to lift them out of poverty,” says Johnson. “They flare a lot, but they are quite motivated to measure and reduce their emissions.”

Ecuador is a developing country, constrained by a lack of capital and technology. It is the world’s largest exporter of bananas, but half its export earnings in 2016 came from oil, about half-a-million barrels per day. It also committed to an unconditional 20.4 to 25 per cent reduction in energy sector emissions by 2025, an ambitious goal for a small country that depends so much on oil and gas. 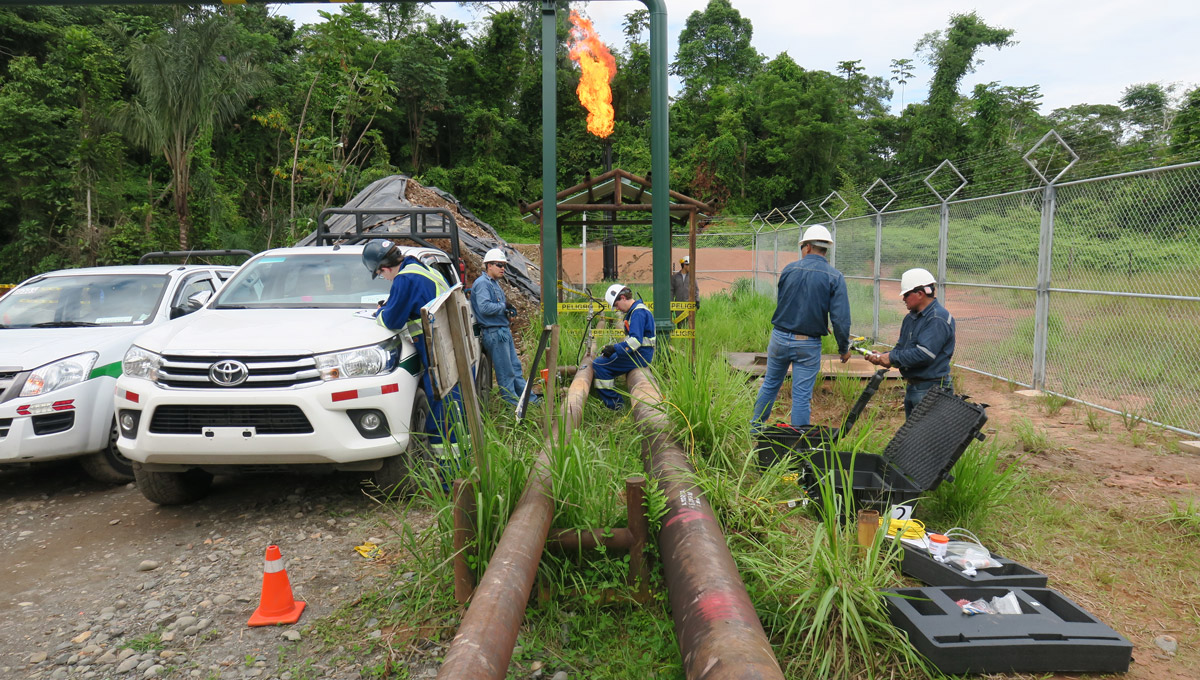 Engineering students Zachary Milani and Simon Festa-Bianchet carried their share of gear to the Amazon to assist their supervisor in the World Bank’s mitigation project and also to develop their own research conducted in Johnson’s Energy and Emissions Research Lab (EERL).

The idea is to capture, compress and truck methane from flare sites to generate electricity elsewhere. But to make this technically and financially viable, engineers first need to know gas flow rates and variability through the pipes to the flare, the composition of those gases and the emission rate burning out of the flare. 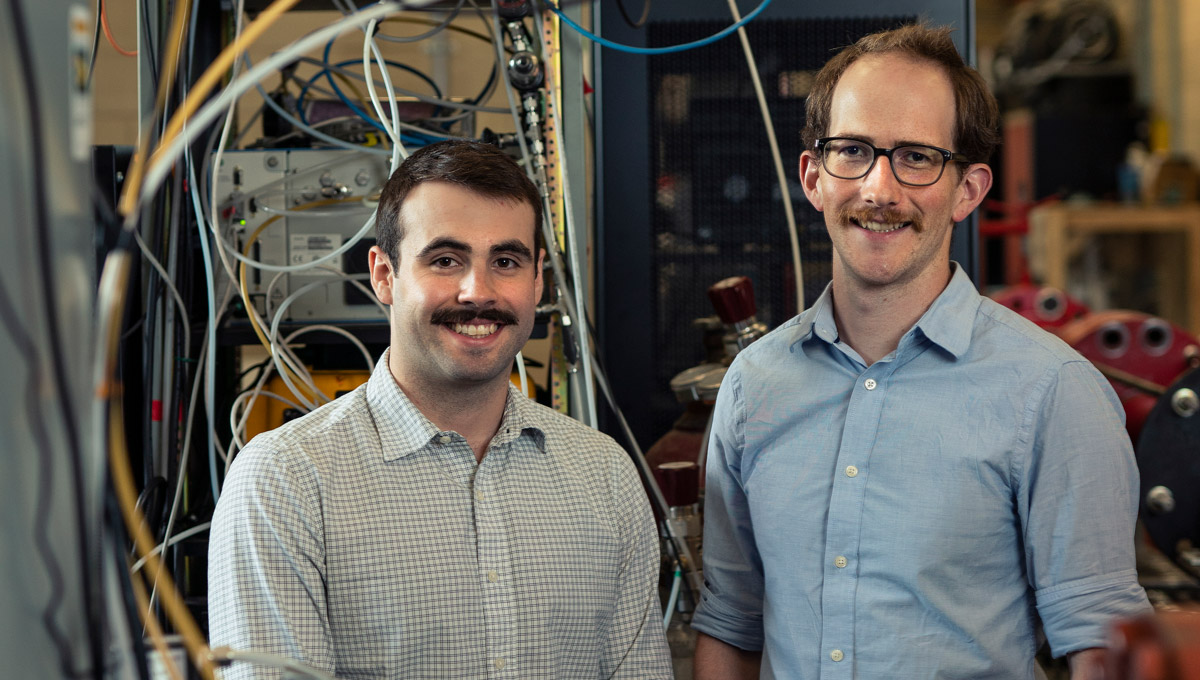 Milani, a master’s student, used two spectrometers—devices that resemble twin telescopes—to analyze the contents of flames as they burned. He and Festa-Bianchet installed probes which communicate with a main processor unit via fibre optic cable—optical flow meters—into taps on the flare lines to measure flow rate and take samples of the gas.

For his PhD, Festa-Bianchet hopes to develop a safe optical flow meter for gas and oil storage tanks. “The optical probes we used in the field have given me ideas on how to bridge the gap between a lab-based sensor and a field deployable one,” he says. “Making an instrument that can be brought into hazardous environments yet still have electrical power is tricky, and seeing how one manufacturer attempted it, and the challenges that remain, was very helpful.” 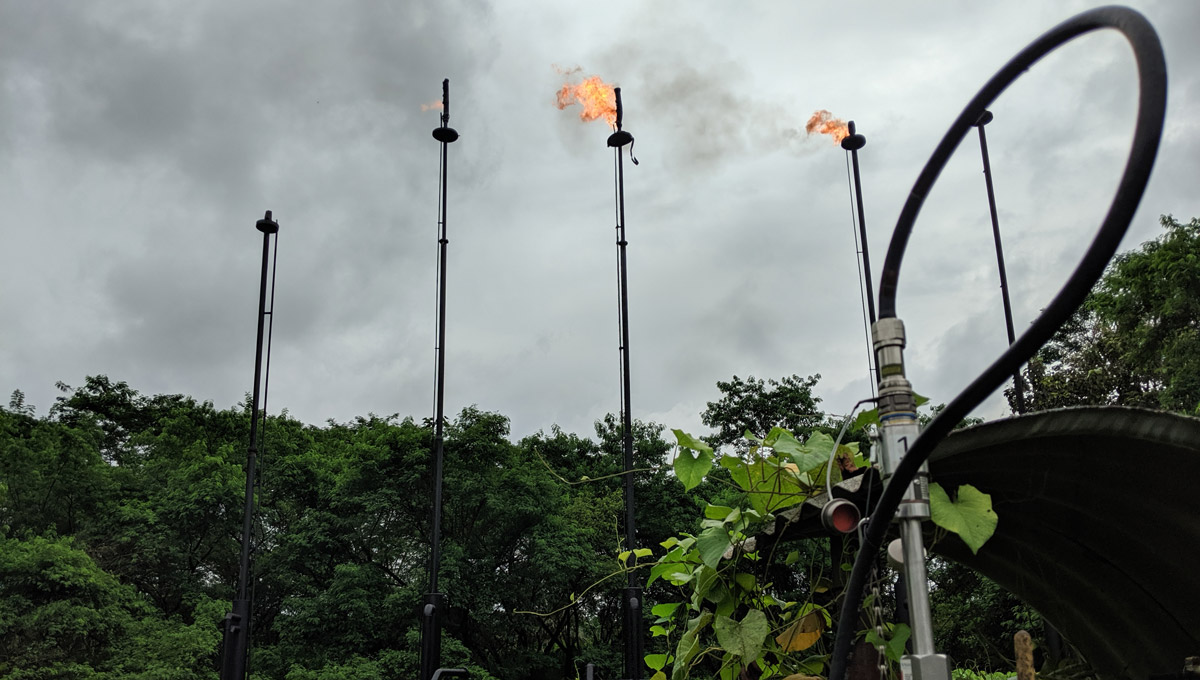 Use It or Lose It

Routine flaring in oil production burns up flammable gases that are considered by-products, despite the fact that essentially those same gasses are sold to households and power plants as natural gas.

Made up primarily of methane, natural gas is a more efficient and cleaner way to generate electricity than coal or diesel fuel. Since it can heat homes and cook meals, an economic case can be made for saving and using methane instead of wastefully venting or flaring it into the atmosphere. This is especially true in parts of Ecuador where expensive diesel is trucked in and used for electricity generation. 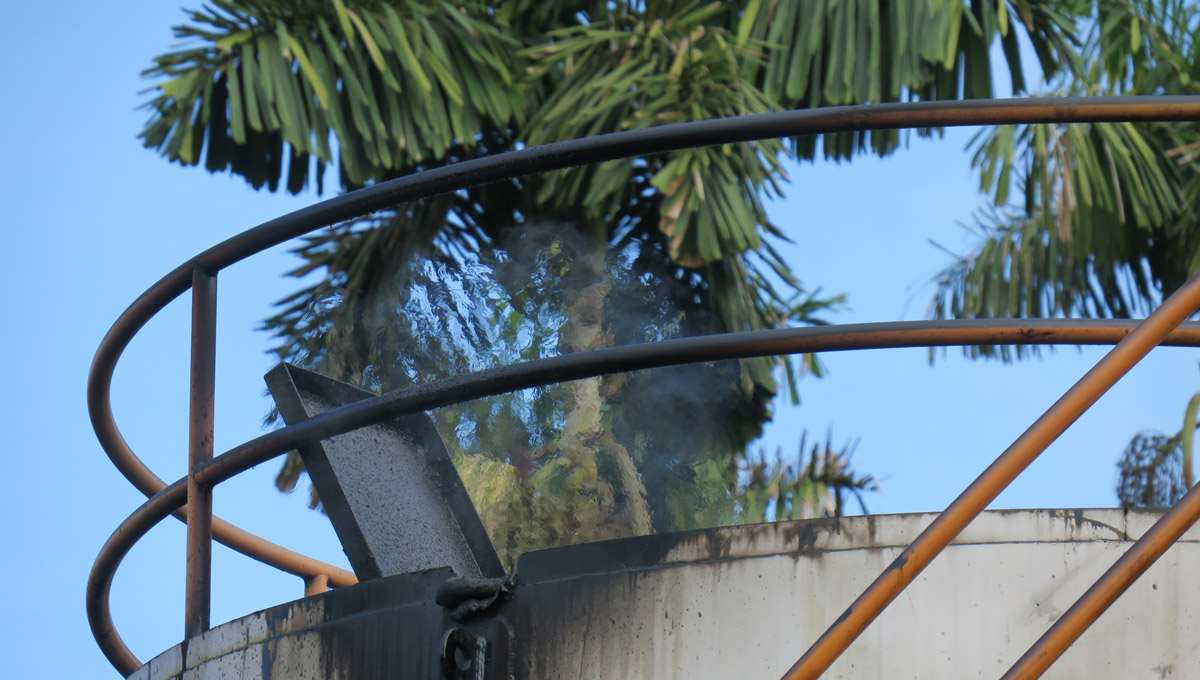 As a greenhouse gas, methane traps more heat and is approximately 34 times more potent than carbon dioxide over a period of 100 years. But little effort has been made to measure methane emissions throughout the world’s gas and oil production industries. Similarly, most emissions from flares are still only estimated, generally by a “qualified observer” who approximates levels of opacity caused by the flare’s smoke.

“Without proper data, it’s easy to argue the volumes are small, the emissions are negligible, or there’s no viable economic method to capture flare gas for electricity or heating,” says Johnson. “That’s where we come in.” 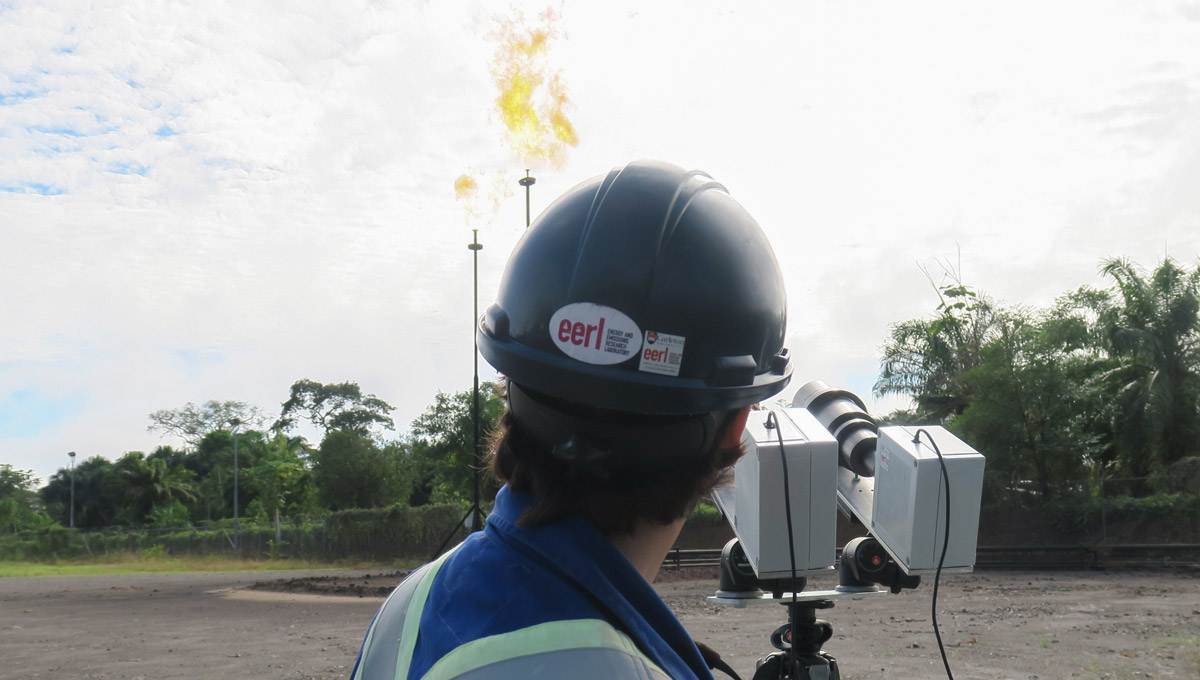 Live Data from the Field

At the end of the trip, Johnson presented an overview of his lab’s technology and research to the engineering faculty at Central University of Ecuador in Quito. There was standing room only by the time he took the stage to discuss the possibilities of Ecuador’s methane-powered future and the efforts of FlareNet and the World Bank.

During their week in the Amazon, Johnson and his students trained the oil company’s workers on the equipment. With considerable help from Adam McRae, an NRCan air emissions research engineer, the EERL team designed the measurement equipment to be as user-friendly and mobile as possible. 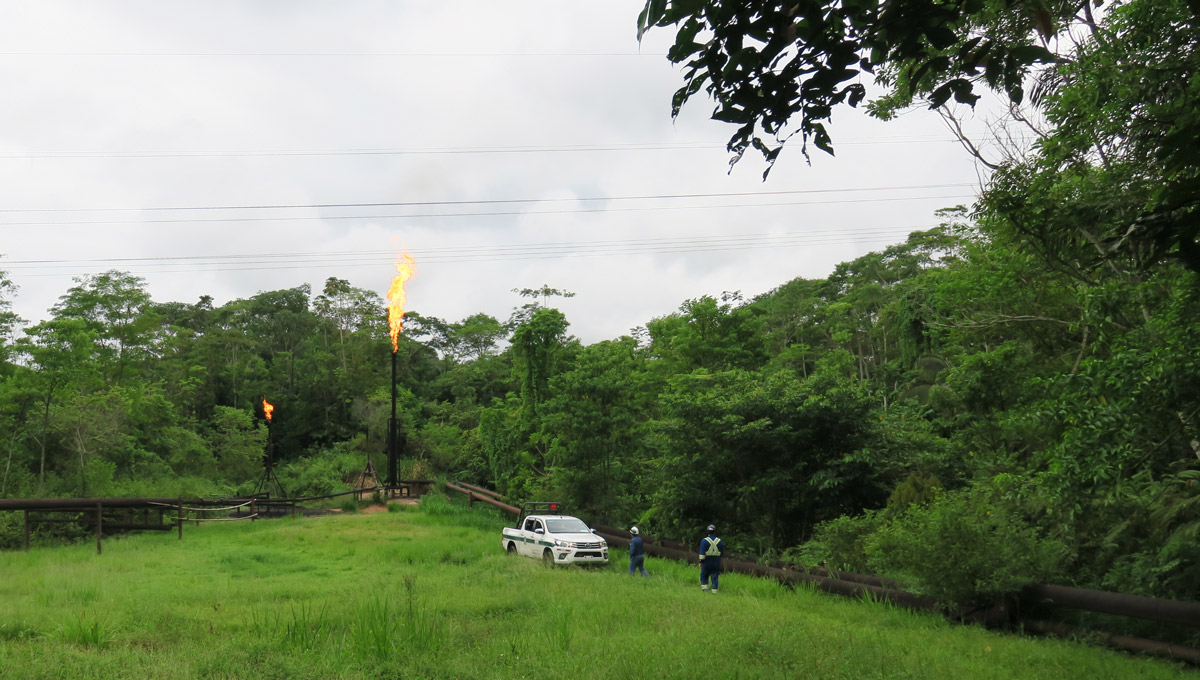 When they were finished, the team left it all in the hands of the Ecuadoreans. With protocols in place, the field measurements were continuing up and down the company’s flare lines through July and August. In the meantime, the Canadian researchers are watching the data automatically upload and stream in from the field using a web-based portal that is publicly available on Carleton’s website.

The uploaded information will be analyzed by Johnson and his team and results will be used by a World Bank-chosen engineering consulting firm this fall. “The data we produce are being used in an engineering design study for the system to capture the gas and bring it centrally to use it for electricity generation,” says Johnson.

By determining how much could be captured and compressed from any given flare, Johnson’s measurements in Ecuador will drive the World Bank flare reduction project.

“It’s easy to say: ‘Hey, you’re burning stuff! Do something with it!’” says Johnson. “Then reality hits, because you have to know what it is that you’re burning. What’s the available volume and pressure? What’s the composition? Is it steady? What pre-processing might be required?” 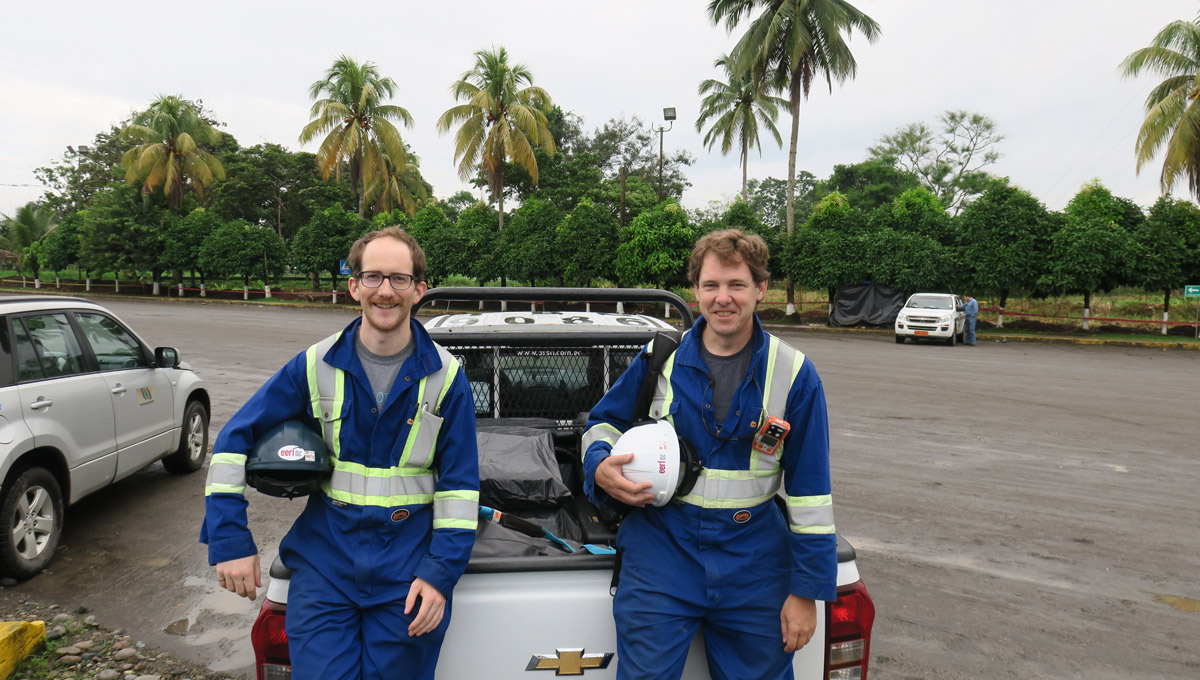 Learning to Adapt on the Fly

Ecuador has South America’s largest oil reserves after Venezuela and Brazil, and most of it is underneath its eastern rural provinces spanning the Amazon rainforest.

As the largest rainforest in the world, the Amazon covers 5.5 million square kilometres, about 40 per cent of South America. It is the world’s most diverse ecosystem, home to several million species of insects, plants and animals.

While the researcher and his team didn’t come across poison dart frogs, jaguars or venomous snakes, they did see monkeys and reptiles from afar and long lines of leaf-cutter ants up close.

“The leaf-cutter ants were definitely a highlight,” says Festa-Bianchet. “I also had to evict a mini colony of ants from an electrical socket after they moved their larvae in.” 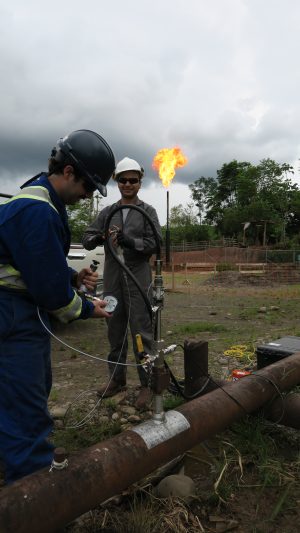 Although specific to the Amazon, this kind of issue is par for the course in the field.

“In the lab, you are able to control most, if not all, of the conditions that may affect a measurement,” says Milani. “If you have something go wrong, there are many resources to help you fix the problem. You usually have time on your side. You are typically comfortable, well-fed and hydrated, with sufficient sleep.”

In the field, however, researchers must adapt to the circumstances and solve problems as they arise.

The researchers spent eight days touring and recording data in the field, typically waking at 5 a.m. and working past dusk. They visited 14 flare sites operated by Petroamazonas EP, some of which were tricky to access—either the taps used to insert the optical flow meters were high off the ground or a few meters into the jungle. The radiating heat from flares amplified the hot and humid conditions, so much so that at some sites they had to work in five-minute shifts.

The team plans to organize another trip to Ecuador, bring more equipment and fix broken devices. To conduct field tests, you need to know how your instruments could malfunction, says Festa-Bianchet.

“It is hard to troubleshoot field tests when things stop working,” he says. “It is even harder when you are dripping sweat on everything and ants are crawling all over your wires.”

Despite the challenges, the trip proved to be insightful and encouraging.

“The most impactful discoveries are made in the field, making it the most exciting part of research in my opinion,” says Milani, who has measured emissions of flares in North Dakota and Alberta. “I always try to make myself available for field measurements because you never know what you will find on any given trip.” 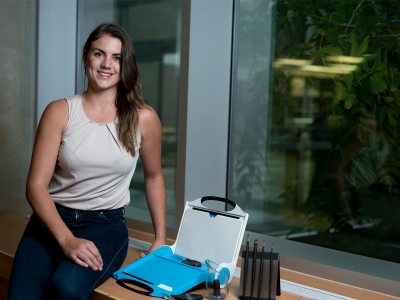 When Alicia Stewart, who graduated last spring from Carleton University’s Industrial Design program, was tasked with working at BEING Studio to create a comprehensive design for her thesis project, she never expected to develop such... More 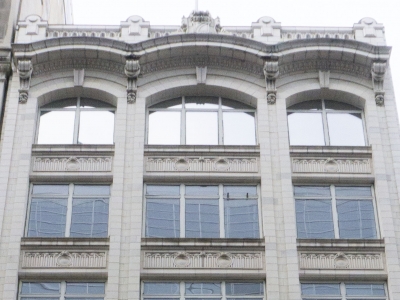 Standing seven storeys tall at 75 Sparks Street, downtown Ottawa’s Saxe Building has been unoccupied for roughly the past decade of its more than a century-long lifespan. Originally completed in 1909, the early reinforced concrete... More 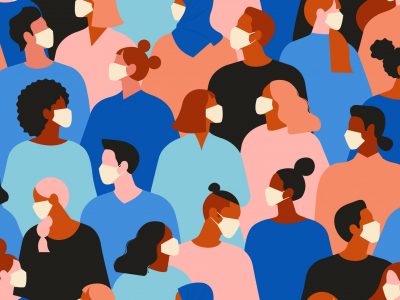 The amount of time we spend puzzling over exponential growth curves has increased, well, exponentially. But the COVID-19 models shown at daily press briefings have their limits. As we move from containing the virus to... More 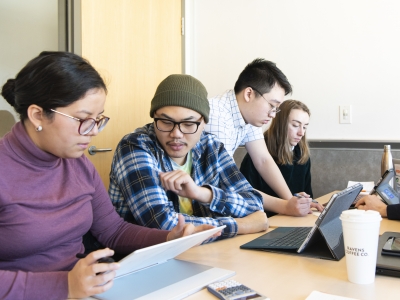