Policy Workshop “EU Partnership with Ukraine, Moldova, and Georgia: Prospects for Reform with Implementation of the EU Association and Free Trade Agreements”

A workshop took place at Carleton University on February 10, 2017, discussing the EU’s partnership with Ukraine, Moldova, and Georgia. The event featured a networking lunch where students and academics could interact with diplomats and panelists. The workshop was comprised of three panels: the first one framing the EU’s evolving Eastern Partnership Policy and their new agreements with Ukraine, Georgia, and Moldova, the second discussing reform in Ukraine, and the third examining reform in Georgia and Moldova.

The workshop attracted an audience of more than eighty people, among them the Ambassadors of Estonia, Georgia, Latvia, Moldova, Slovenia, and Ukraine. Representatives from Global Affairs Canada, the Embassy of the Russian Federation, the Embassy of Poland, Export Development Canada, the Ukrainian Association of Canada, and the Prime Minister’s Youth Council were also in attendance. 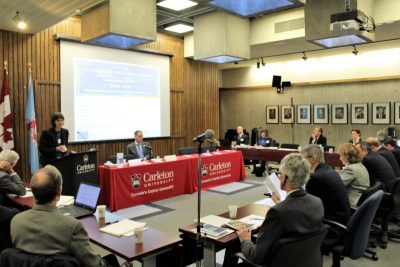 The event was organized by Carleton’s Jean Monnet Chair in EU Relations with Russia and the Eastern Neighbourhood, held by Dr. Joan DeBardeleben, and supported by the Canada-Europe Transatlantic Dialogue (CETD).