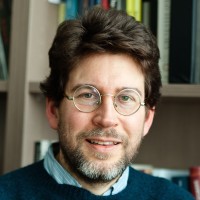 James Casteel is a historian of modern and contemporary Europe and is cross-appointed between the Institute of European, Russian and Eurasian Studies and the Bachelor of Global and International Studies in Kroeger College. He currently serves as Program Director for Migration and Diaspora Studies.

Professor Casteel holds a B.A. in German and Philosophy from Tulane University (1994), an M.A. in the Social Sciences from the University of Chicago (1997) and a Ph.D. in modern European history from Rutgers University (2005).  He spent significant time studying in Germany at the Humboldt Universität zu Berlin, the Universität Hamburg, and the Johannes Gutenberg Universität Mainz.  He has held fellowships and grants from Fulbright, the Rutgers Centre for Historical Analysis, the German Academic Exchange Service (DAAD), and the Social Science and Humanities Research Council of Canada (SSHRC). He has been a visiting scholar at the Institute for East European Studies at the Free University of Berlin and the Selma Stern Centre for Jewish Studies Berlin-Brandenburg.

Professor Casteel’s research interests include transnational relations between Germany and Russia from the nineteenth to twenty-first centuries, nations and empires in central and eastern Europe, diasporic cultures and belonging, European Jewish history including the Holocaust, and transnational and global approaches to the European past.