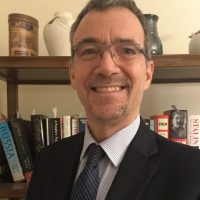 Leigh Sarty is a proud EURUS alumnus, graduating with an M.A. in 1985 when it was the Institute of Soviet and East European Studies. Following a Ph.D. in the Department of Political Science and the Harriman Institute for Advanced Study of the Soviet Union at Columbia University (1991), Sarty undertook postdoctoral work at the University of Toronto and at NPSIA at Carleton before joining the Department of External Affairs in 1993. He has served abroad at the Canadian Embassy in Moscow (Second Secretary, 1996-1999, and Deputy Head of Mission, 2012-2016) and in Beijing (Counsellor and Head of the Political Section, 2003-2007). At headquarters, he was Director for Russia and East Europe (2007-2012) and Director General for Europe (2016-2018) prior to his appointment as Global Affairs Canada Scholar in Residence in 2018.

As GAC Scholar in Residence, Sarty has engaged in both policy work and independent research focused on Russia, China and the evolution of the rules-based international order. His article “The Fragile Authoritarians: China, Russia and Canadian Foreign Policy” was published on-line by International Journal in December 2020; a related piece titled “Us and Them: East-West Relations Reconsidered” is currently under review. Soon after his appointment as Scholar in Residence, Sarty was named a Senior Fellow at NPSIA, where he has taught a seminar on “China and Russia in Contemporary World Politics” since Fall 2019.