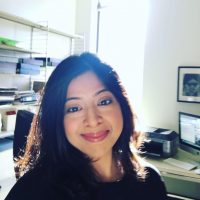 Malini Guha (she/her) is an Associate Professor of Film Studies. She is a settler of South Asian descent. Guha is cross-appointed with the Institute for Studies in Art and Culture and is affiliated with Migration and Diaspora Studies. Her research interests are expansive, extending from a longstanding commitment to thinking and writing about film and the city as well diasporic and postcolonial cinemas to more recent turns toward the subject of world cinema and other moving image practices, including public projection.

Her essays have been published in Feminist Media Histories, the Canadian Journal of Film Studies, NECSUS, Screening the Past and the Journal of British Cinema and Television. Her first monograph, From Empire to the World: Migrant London and Paris in Cinema (Edinburgh University Press, 2015) is a study of cinematic London and Paris from the perspective of migration, globalization and the end of empire in a British and French context. As a contributing editor for the online journal Mediapolis, she writes a regular column, ‘Screening Canada’, where she explores an aspect of Canada’s mediated place-making in relation to recent issues concerning its global role and domestic negotiation of racial and ethnic difference.

Guha assumed the role of Resident Critic for Knot Projections 2019: Imagining Publics, a public projection program launched by Knot Project Space and SAW Video (2018-19). Under the leadership of SAW Video’s Programming Director, she worked directly with five artists who produced moving image work that was projected on multiple sites across Ottawa.

In 2019, she was an invited speaker for the Sydney Asian Art Series. As part of this series, she programmed and introduced a tribute screening for the late Bengali director, Mrinal Sen, held at the New South Wales Art Gallery.

She is currently co-editing a book on London in cinema and media that is forthcoming with Routledge in 2022. Guha is a collaborator on the SSRHC Insight Partnership Grant “Archive/Counter-Archive: Activating Canada’s Moving Image Heritage.” She is also a member of the editorial board of the Canadian Journal of Film Studies.

“Revisiting Lists in a Time of Rebellion”, Mediapolis 5.2 (July 2020) (https://www.mediapolisjournal.com/2020/07/revisiting-lists-in-a-time-of-rebellion/)

‘Unceded’ as Elsewhere: Indigenous-Led Concepts of Architecture at

Beyond the Archive: The Work of Remembrance in John Akomfrah’s The Nine Muses (2010)”, Screening the Past, no. 43 (2018). (http://www.screeningthepast.com/issue-43-dossier-materialising-absence-in-film-and-media/beyond-the-archive-the-work-of-remembrance-in-john-akomfrahs-the-nine-muses/) 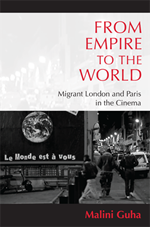 “The Cinematic Revival of Low London in the Age of Speculative Urbanism” in London on Film: The City and Social Change, eds. Pamela Hirsch and Chris O’Rourke and Pamela Hirsch (Palgrave Macmillan, 2017), pp. 205-220.

From Empire to the World: Migrant London and Paris in Cinema. Edinburgh University Press, 2015.