Adjunct Research Professor Michael Petrou has written a chapter in the recently published “Armed Jews in the Americas“. Professor Petrou is a well-respected historian and journalist who will be teaching for the History Department again in winter 2022.

To learn more about this new publication, including Professor Petrou’s chapter “‘Our Fight Is Not Yet Over’: Jewish-Canadians in the Spanish Civil War”, please visit the publisher’s website for more details. 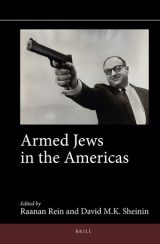 A Jewish weapons manufacturer during the American Civil War, a Jewish-Canadian chair of the Metropolitan Toronto Police Board, and Jewish-Argentine guerrilla fighters—these are some of the individuals discussed in this first-of-its-kind volume. It brings together some of the best new works on armed Jews in the Americas. Links between Jews and their ties to weapons are addressed through multiple cultural, political, social, and ideological contexts, thus breaking down longstanding, stilted myths in many societies about Jews and weaponry. Anti-Semitism and Jewish self-defense, Jewish volunteers in the Spanish Civil War and in the 1948 Arab-Israeli war, and Jewish-American gangsters as ethnic heroes form part of the little-researched topic of Jews and arms in the Americas.