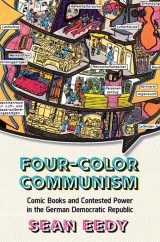 As with all other forms of popular culture, comics in East Germany were tightly controlled by the state. Comics were employed as extensions of the regime’s educational system, delivering official ideology so as to develop the “socialist personality” of young people and generate enthusiasm for state socialism. The East German children who avidly read these comics, however, found their own meanings in and projected their own desires upon them. Four-Color Communism gives a lively account of East German comics from both perspectives, showing how the perceived freedoms they embodied created expectations that ultimately limited the regime’s efforts to bring readers into the fold.

Sean Eedy holds a doctorate in history from Carleton University in Ottawa, Canada. His publications include articles and chapters on comic book representations of the Holocaust, animated DEFA adaptations of Brothers Grimm’s Fairy Tales, and time travel and historical representation in the work of Hannes Hegen.  Sean is currently an independent researcher and part-time professor in the Department of History at Trent University.