Professor Jacob Kovalio awarded medal by the Government of Japan 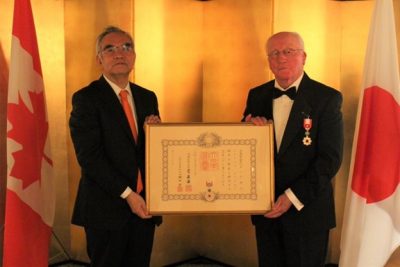 On Thursday, June 23rd,  Jacob Kovalio – Associate Professor of Japanese History – was conferred the Order of the Rising Sun, Gold Rays with Rosette at a ceremony hosted by the Ambassador of Japan to Canada, HE Yamanouchi Kanji. Dr. Kovalio earned the medal for his contribution to the enhancement of the knowledge of Japan’s history and culture among Canadians as well as to the strengthening of Canadian-Japanese relations. In 2014, he received a special Citation by the Foreign Minister of Japan for his academic and educational work.

Originally from Israel, Dr. Kovalio holds BA degrees in History and Development Economics from the University of Tel-Aviv as well as MA in Chinese History and PhD in Japanese History, both from the University of Pittsburgh. His research, teaching, and writing focus on modern and contemporary Japanese political, diplomatic, cultural history, and nationalism.  He has spent a total of six years in Japan.

Among his writings are “History and Japan’s relations with Northeast Asia and India,” “A.J. Toynbee and Japan,” (in Jacob Kovalio ed., Japan in Focus), The Russian Protocols of Zion in Japan, freeandopenindopacific.net, etc.

Jacob Kovalio has taught at Carleton since 1987, winning three Excellence in Teaching awards.