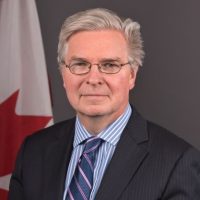 Vincent Rigby was appointed national security and intelligence advisor to the prime minister of Canada in January 2020 and retired in September 2021.

From 2013 to 2017, Mr. Rigby was assistant deputy minister of strategic policy at Global Affairs Canada, where he was responsible for providing integrated strategic policy advice related to the foreign policy, international assistance and international trade streams of the department. In this capacity, Mr. Rigby also served as the personal representative (sherpa) to the prime minister at the Group of Twenty (G20), supporting three G20 Leaders’ Summits. He carried out a number of additional roles as assistant deputy minister, including as the department’s chief results and delivery officer, Group of Seven sous-sherpa, chief negotiator for the Post-2015 Development Agenda and chair of the Arctic Council’s Senior Arctic Officials.

Before the creation of Global Affairs Canada, Mr. Rigby was vice-president of the Strategic Policy and Performance Branch of the former Canadian International Development Agency. In this role, he was responsible for providing advice on Canada’s international assistance policy as well as overseeing the performance management and evaluation of Canada’s development program.

From 2008 to 2010, Mr. Rigby was the executive director of the International Assessment Secretariat at the Privy Council Office (PCO). He was also the Afghanistan intelligence lead official while at the PCO, where he was responsible for coordinating the Canadian intelligence community in support of Canada’s Afghanistan mission.

Before arriving at the PCO, Mr. Rigby was Assistant Deputy Minister (policy) in the Department of National Defence (DND) from 2006 to 2008. Over his 14 years at the DND, he held a number of other positions within the Policy Group, including director general policy planning, director of policy development, and director of arms and proliferation control policy. Prior to joining the DND, he was a defence and foreign policy analyst at the Research Branch of the Library of Parliament from 1991 to 1994.

Mr. Rigby holds an M.A. in diplomatic and military history from Carleton University.