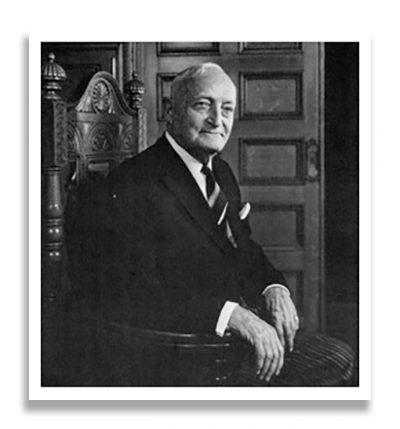 The School of International Affairs is named for Senator Norman McLeod Paterson whose generous grant enabled its establishment in 1965.

Senator Paterson was born in Portage la Prairie, Manitoba, in August 1883. He began his career with the Manitoba Railway and Canal Company in 1897, later joining the Great Northern Railway of Canada as a telegrapher, and rising to the position of purchasing agent before resigning in 1903 to go into the grain business with his father.

In 1908, he founded and organized N.M. Paterson and Company, Limited, which subsequently became N.M. Paterson and Sons, Limited. The company-owned and operated large numbers of grain elevators in Ontario, Manitoba and Saskatchewan, as well as a fleet of freighters on the Great Lakes.
Senator Paterson made important contributions to Canadian public life. He was appointed to the Senate of Canada in 1940 by Prime Minister Mackenzie King. When he retired from the Senate in 1981, he held the record for the oldest active senator. Senator Paterson was a member of Carleton University’s Board of Governors for many years. He also served as the first chancellor of Lakehead University in Thunder Bay, Ontario.

Senator Paterson took a great interest in international education and international affairs. As long as his health permitted he would endeavour to meet with at least some members of each year’s class of new students at NPSIA. Senator Paterson passed away in August 1983 a week after celebrating his 100th birthday.