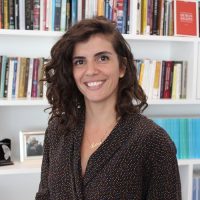 Lama Mourad is an Assistant Professor at the Norman Paterson School of International Affairs at Carleton University. Her research interests are focused on the intersection of forced migration, local governance, and the politics of borders, with a regional focus on the Middle East.

Professor Mourad previously held fellowships at Perry World House, University of Pennsylvania, and with the Middle East Initiative at the Harvard Kennedy School of Government. Her research has been supported by a number of institutions and agencies, including the Harvard Kennedy School’s Middle East Initiative, the Social Sciences and Humanities Research Council, and the International Development Research Centre (IDRC). Her work has been published in both academic and public outlets, including the Journal of Refugee Studies, Middle East Law and Governance, Forced Migration Studies, the European Journal of International Relations as well as The Atlantic, Lawfare, The Washington Post’s Monkey Cage, and The Toronto Star.