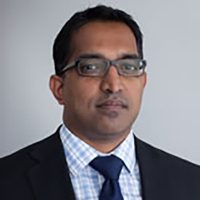 Yiagadeesen (Teddy) Samy is a Professor of international affairs at the Norman Paterson School of International Affairs (NPSIA) at Carleton University. He is currently the Director of NPSIA, a position that he has occupied since 2017. Prior to that, he served as Associate Director (MA program) from 2010 to 2016, and as Acting Associate Director (MA program) from 2008 to 2009. He first joined NPSIA in 2003 and has since taught graduate courses in development economics, international trade, macroeconomics, development assistance and quantitative methods.

His research has appeared in journals such as the Canadian Journal of Development Studies, Third World Quarterly, International Interactions, the Journal of Conflict Resolution, Conflict Management and Peace Science, Foreign Policy Analysis and Applied Economics. Professor Samy is the recipient of a Research Achievement Award (2013-2014) and a Research Excellence Award (2008) from Carleton University.