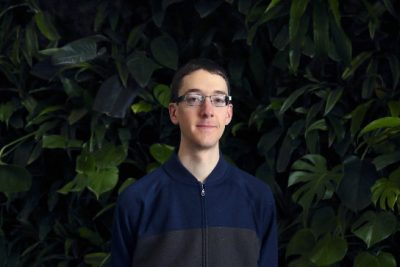 It was the study of the natural world that lead Bernard Llanos, a recent graduate of the School of Computer Science, into the realm of computer graphics.

After time spent as a research assistant in chemical laboratories, Llanos says he became increasingly curious about the mathematics and the algorithms that were leading to the data in his research results.

Llanos says he decided to make a change and enrolled in the game development stream within the School of Computer Science at Carleton University.

Designing games had been a past time of his, but one that had been limited to pen and paper.  Llanos says he lacked the knowledge needed to develop the games he was designing.

Llanos spent time researching stippling based rendering, image smoothing and ways of combining the strengths of both techniques as the topic for his honours project.

Llanos says his journey will eventually come full circle with goals of returning to the study of nature through work in the agricultural industry. Llanos says he’d like to work with monitoring systems that control the environments for plants within indoor vertical farming.

It is a desire motivated by more than personal interest according to  Llanos.

“Everyone can benefit from agriculture, not just the wealthy. I want to support people who don’t already have all they need,” he says.

While his studies have not followed a linear path, Llanos says he’s given himself the freedom to study what most interested him and not be limited by the academic choices he made in selecting a university program right out of high school.