Although the athletic and medical communities have become increasingly aware about the dangers of concussions and other brain injuries over the past few years, we still don’t have a precise picture of what happens inside our heads and helmets when they experience a significant impact.

Carleton University’s Oren Petel, a professor in Mechanical and Aerospace Engineering, has been working to address this problem since having a eureka moment as a PhD student in 2010.

His efforts are poised to revolutionize helmet testing and design and, at the same time, deepen our understanding of how brain tissue responds to acceleration and contact.

With crucial contributions from his Impact Dynamics Research Group, Petel has developed a system that, to the best of his knowledge, is the world’s fastest lab-based continuous X-ray machine other than synchrotron particle accelerators such as the Canadian Light Source in Saskatoon. 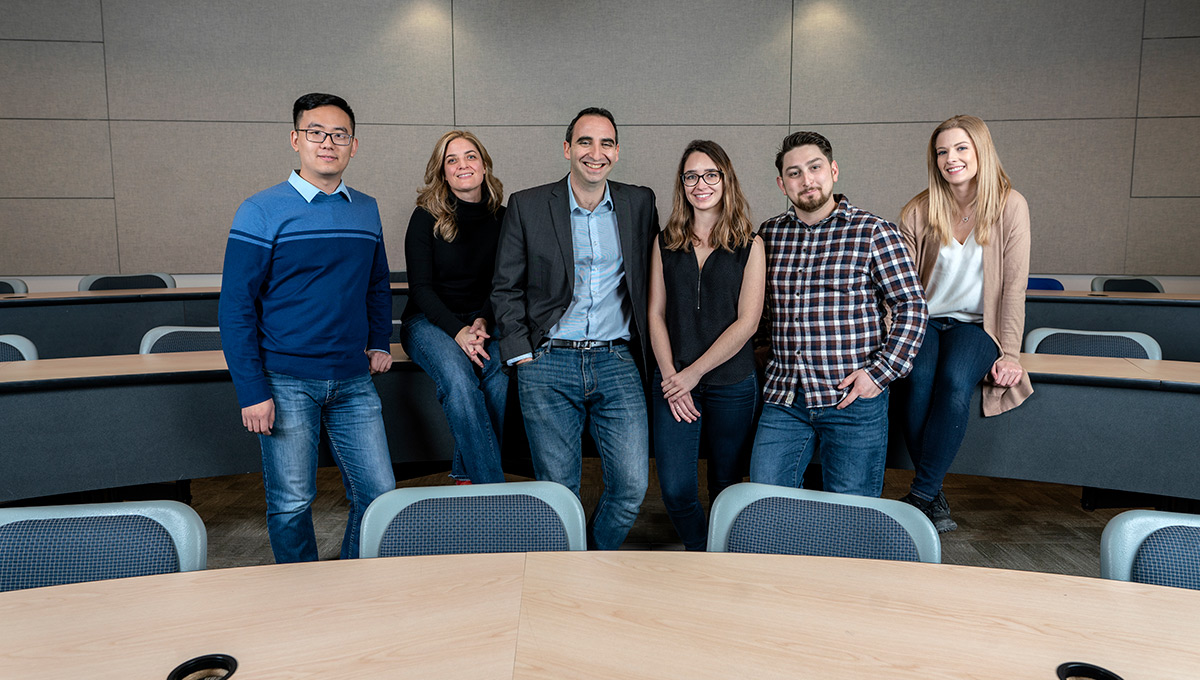 Set up in a small room on the sixth floor of Carleton’s Canal Building, Petel’s system includes a pneumatically driven linear impactor capable of ram speeds ranging from one to a dozen metres a second, a couple of different headforms that can be fitted with helmets, and an X-ray camera that typically captures 7,500 frames a second but can reach up to 100,000 in that time.

These series of images are used to create an X-ray video that shows with incredible detail how helmets and the replica brains inside the headform are affected by impact. The videos show both internal strain on the brain and interaction between head and helmet.

“We think this is the future of helmet testing,” says Petel, who submitted a patent application for the X-ray system and testing methodology. “Current approaches are primarily concerned with the kinematics of the head, but they don’t allow us to physically see what is or isn’t working in the helmet.

“With this approach, we can see how the components of the helmet deform and engage with the head. We can also see internal strain and deformation of the replica brain, essentially the force that is transferred to the head. It’s next-level information that can be used to validate the computer models used in helmet design.

“Our intent was always to develop new tools for the evaluation of helmet performance and head injury, and we’re all really excited about where this research will lead.” 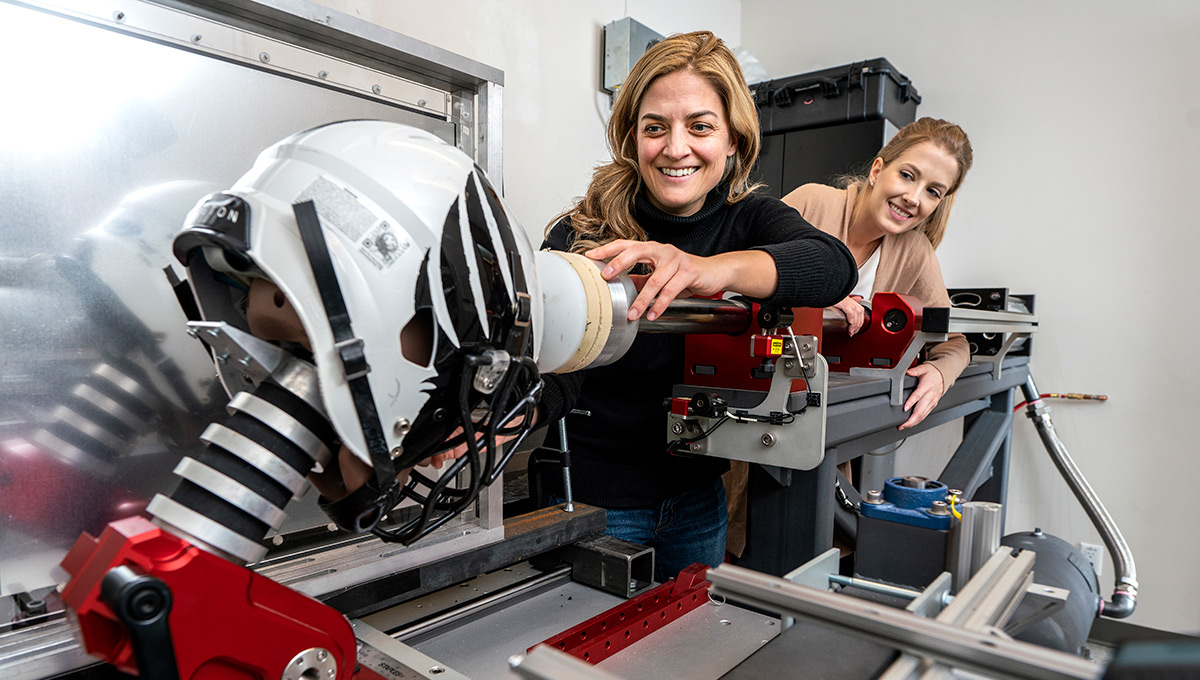 Petel, who has been at Carleton since 2013, was born and raised in Montreal. Naturally, he was a Habs fan, and started playing hockey at age three.

He still laces up his blades in a recreational league on campus, and one of his young daughters has started to play hockey as well.

Like so many Canadians, he noted the number of NHL stars whose careers — and, in some cases, lives — were cut short by concussions.

In 2010, while pursuing a PhD at McGill University focused on injury biomechanics related to blast waves, Petel attended a camera company presentation on digital image correlation.

“That switched a light on in my head,” he recalls, explaining how he wondered whether techniques similar to what is done to stitch together composite images could be used to create an in-depth look at real-time changes such as tissue deformation inside the human body.

“It’s taken me eight and a half years to get to this point.

“Concussion is one of the most obvious areas of public health concern that is in need of more ideas and research. There’s been an emphasis on improving diagnosis and treatment of concussion, and rightfully so, but few people have really been exploring new tools to evaluate helmet performance and design. That’s the space we’re trying to fill.” 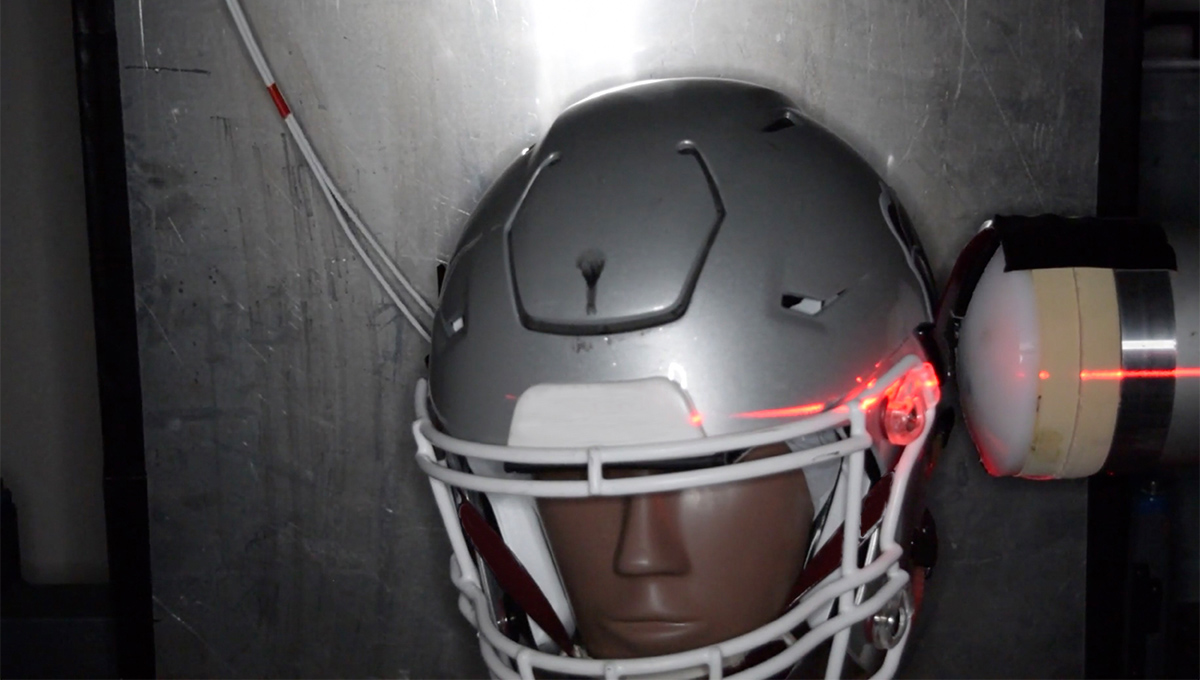 Conceptualized in 2014 and funded by $248,000 from the Canada Foundation for Innovation and Ontario Research Fund, the X-ray system was built in-house at Carleton by Petel and his students, becoming operational in the summer of 2017. They have also worked with partners to develop sophisticated replica brains used during tests.

The material on the front face of the 13-kilogram linear impactor can be changed to simulate different types of impact. The lab currently has two headforms — the industry standard Hybrid III, a classic crash test dummy, and a more advanced and realistic model created by Petel’s collaborators, a team from Defence Research and Development Canada (DRDC) Valcartier Research Center led by Simon Ouellet.

Petel, who is talking to helmet manufacturers about potential applications for his system, has also received funding from the Canadian Institutes of Health Research, the Natural Sciences and Engineering Research Council of Canada, the U.S. government and industrial partners. He has collaborated with researchers at the University of Ottawa and Ottawa Hospital, as well as Carleton colleagues such as fellow Mechanical and Aerospace Engineering faculty member, Hanspeter Frei, and Neuroscience Prof. Matthew Holahan.

“This type of testing could have an almost immediate impact on helmet design,” says Petel, whose ultimate long-term goal is to influence helmet safety standards.

Currently, companies essentially put hollow metal headforms inside their helmets, fit them with accelerometers and drop them from various heights to simulate different types of impact.

“The current testing approach helps us develop helmets that are excellent at preventing skull fractures,” says Petel, “which is the original purpose of a helmet. But we have realized that concussions and the cumulative impact of sub-concussive events are also a very serious issue that require changes to testing and design approaches.

“We see the evaluation techniques developed at Carleton providing important complementary information to helmet designers. Our research may even be able to pick up on the finer details of low-severity impacts.” 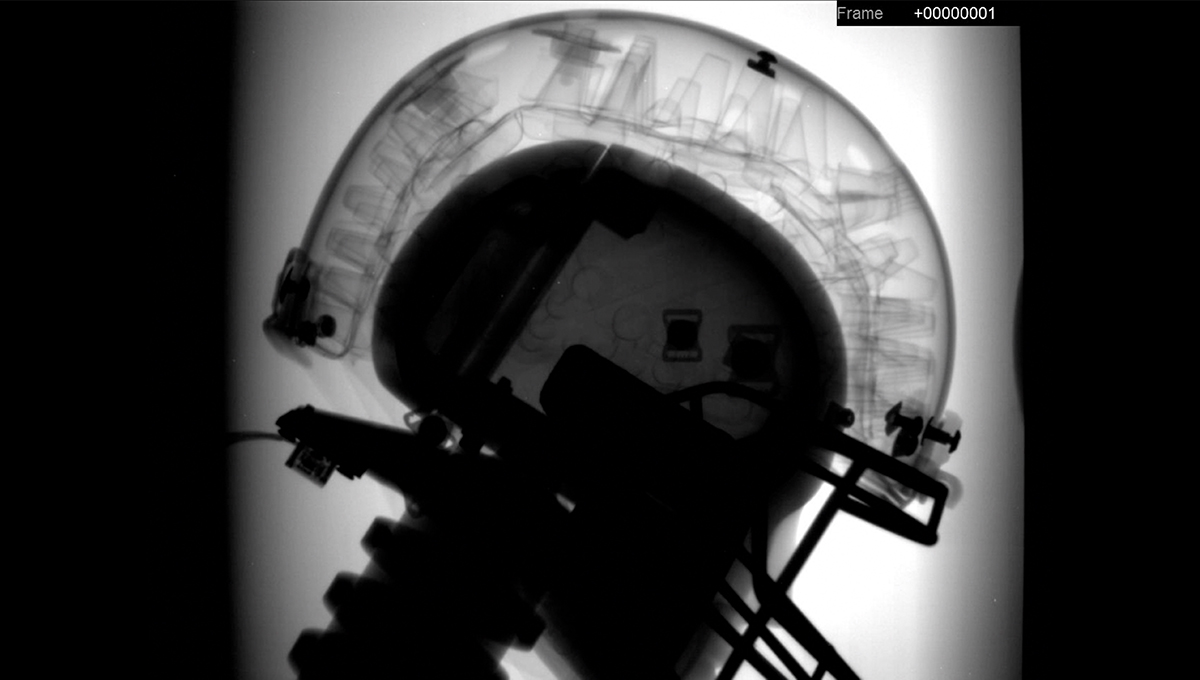 The applications of Petel’s research extend beyond high-impact sports such as hockey and football and the military to any activity with a risk of falling. Other uses could include studying fire to see exactly how and where the combustion begins — basically, any situation where there is “optical interference” blocking the images you’re trying to see.

He will be seeking additional funding to expand the X-ray system so that it has multiple camera angles, which could potentially look at the results of impact to other body parts, not just the head.

Petel’s next steps, beyond securing a patent, include publishing the Impact Dynamics Research Group’s findings in major international journals and presenting results at international conferences.

Much of the heavy lifting will fall upon postdoctoral fellow Karen Taylor and the students, both graduate and undergraduate, in his lab.

“They’re the ones pushing the vision forward,” says Petel. “We have a very strong team, with a lot of different backgrounds, from physics and engineering to kinesiology. They don’t let me get my hands dirty anymore.”

Taylor came to Carleton in November after finishing her PhD at the University of Ottawa.

“I saw the potential of this system during my PhD research,” says Taylor, whose thesis focused on how helmet design can reduce brain tissue strain. “Helmet design today can be a little more trial and error than systematic design, due to the limitations of what can currently be measured. With this system, we’ll be able to see — and understand — so much more.

“This is just the beginning of what we can do,” adds Taylor. “There are no limits.” 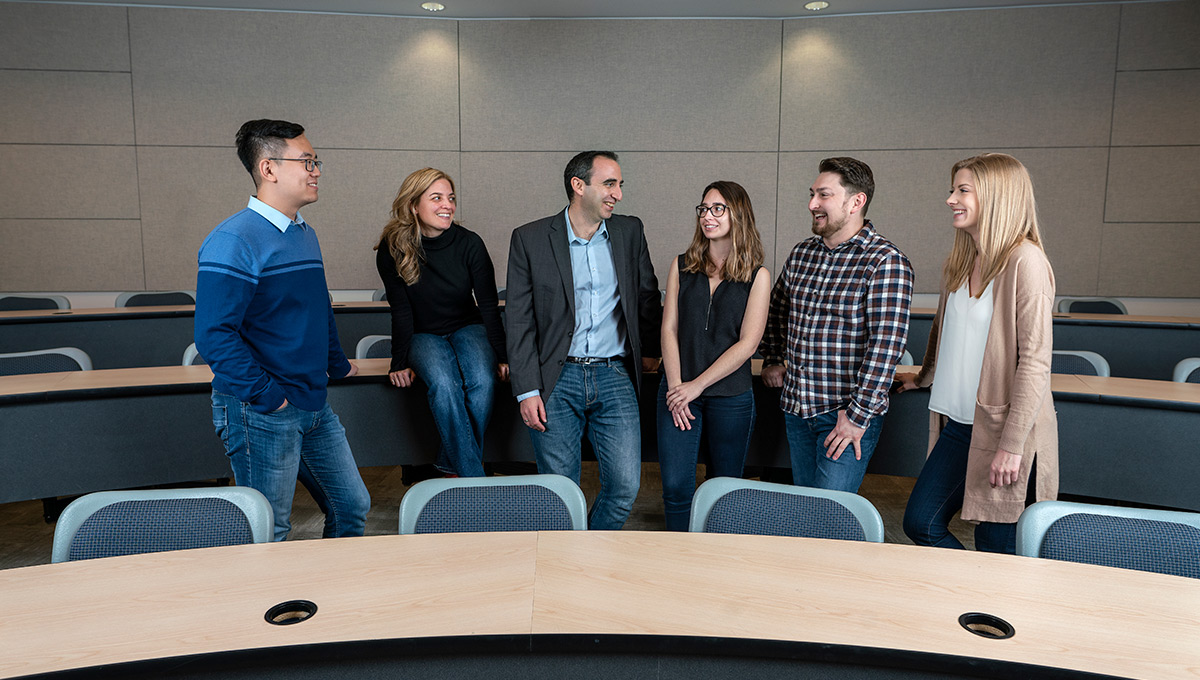 MacKenzie Brannen, a third-year Biomedical and Mechanical Engineering student in Petel’s research group, didn’t think she would have an opportunity to do hands-on research like this before grad school.

“It’s an amazing way to be able to apply what I’m learning,” says Brannen, who developed and fabricated the “scaffolding” for the replica brains that are put inside the headforms. “It helps me understand the concepts we’re learning in the classroom, and it’s been really fun to come up with and build things.

“The only goal is to make the part work,” she continues. “There’s no solution manual to follow. We have to be creative.”

The tangibility of this research appeals to Petel as well.

“Ultimately, we’re doing something that will benefit the general public, and hopefully Canadian industry too,” he says. “We’re excited about all of the current and future partnerships and opportunities

“At the end of the day, if you can go home having done something to improve the health of Canadians, you’re going to feel pretty good.” 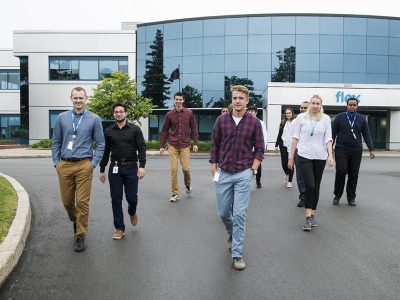 Carleton students from electrical and mechanical engineering, along with students from the Sprott School of Business have been granted exclusive access inside multinational technological manufacturer Flex, thanks to the Carleton co-op program’s partnership with the... More 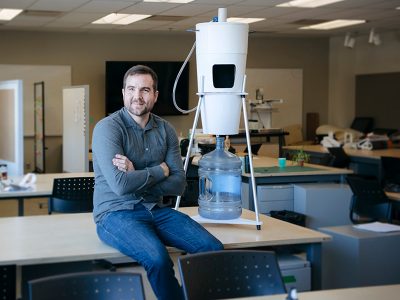 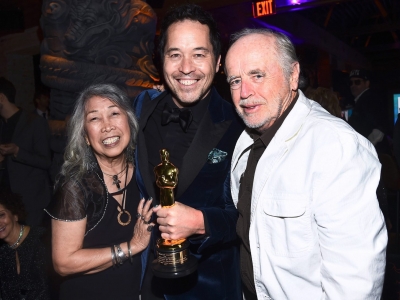 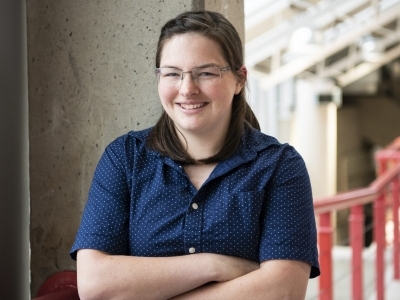