Politics, Activism, and Researching the History of Fashion

Fourth-year student who focuses her studies on the history of material culture participates in historic Daughters of the Vote initiative.

The goal of the groundbreaking Daughters of the Vote initiative is to inspire and equip young women with the skills to help them become community advocates and future political leaders.

To achieve this, Daughters of the Vote invites 338 diverse and dynamic women ages 18-23 to represent their federal riding at a national event. In the Spring of 2019, fourth-year BA Combined Honours student in History and Political Science, Emelie Lanthier, was a delegate.

“A friend of mine encouraged me to apply to be a delegate for my small, northern community,” says Lanthier. “I come from a place that doesn’t wield the same political clout or visibility as larger southern ridings, so I was eager to use this opportunity to give prominence to my community on a national stage.”

For Daughters of the Vote 2019, Lanthier proudly represented her hometown riding of Timmins-James Bay, occupied by Member of Parliament, the New Democratic Party of Canada’s Charlie Angus. As part of the initiative, she attended seminars and workshops led by influential women and activists from across the country.

At the workshops, these trailblazing women from all across the political spectrum were invited to speak about their unique journeys to becoming leaders in Canada. Discussion topics ranged from grassroots volunteer advocacy to the highs and lows of running for federal office.

“We dealt with an array of important issues, including Indigenous politics, media, and anti-oppression training. This experience prepared delegates with the tools to influence politics once Daughters of the Vote wrapped.”

This training and discussion further opened Lanthier’s eyes to the degree of which many Canadian girls and women feel disenfranchised and marginalized.

“There are so many valid grievances women have towards the overall structure of Canadian society that I wasn’t aware of.”

“Daughters of the Vote allows women the space to air their experienced injustices, to engage with other women and to discuss the long-standing histories and legacies of discrimination,” says Lanthier.

Lanthier says that we need to hear real, lived experiences in order to make honest progress. And that’s why Daughters of the Vote is so important.

As a capstone for the week’s events, Lanthier and the other 337 delegates took the seat of their corresponding MP in the House of Commons to speak to an issue that concerned them in their communities. Lanthier chose to focus on systems of homelessness in Timmins-James Bay.

“I used my speech to address the troubling correlation between the hidden and more covert forms of homelessness, and racial and gendered forms of marginalization and vulnerability,” says Lanthier.

“I wanted to bring to the fore the lack of funding for social assistance resources and programs in Northern Ontario, and the systemic problems that underlie and perpetuate this issue.”

In a moment of protest sure to go down in Canada’s national history, many of the Daughters of the Vote ambassadors made a powerful statement on Canadian politics in 2019.

While occupying the seats of their MPs, the delegates were addressed by each federal party leader. Approximately 25 to 40 delegates chose to walk out of the House of Commons as Conservative Leader Andrew Scheer rose to speak and about the same number turned their backs to Prime Minister Justin Trudeau as he began his statement.

“Some of the delegates chose to make this protest in response to the government’s actions towards Indigenous communities, and others did it as a method of expressing their solidarity with former cabinet ministers Jody Wilson-Raybould and Jane Philpott,” explains Lanthier.

“It was an exciting moment and indeed, the dinner conversations that evening were very lively. I did not participate in these acts of protest because I felt more inclined to listen to what was being said regardless of whether those views aligned with my own personal and political views.”

Lanthier reflects on her Daughters of the Vote experience as one of the most enriching and rewarding of her life. “I had the opportunity to meet many intelligent, ambitious young women who I know will make a positive impact on our political landscape and institutions,” she says.

Exposure to positive female role models in politics and in our national community empower young women, like myself, to recognize and harness our ability to affect political and social change.

“It has been an absolute pleasure to have had the chance to listen and share our personal and lived experiences as young women, and more importantly, sharpen our skills and refine our goals in contributing to a brighter future for Canadian women in politics.” 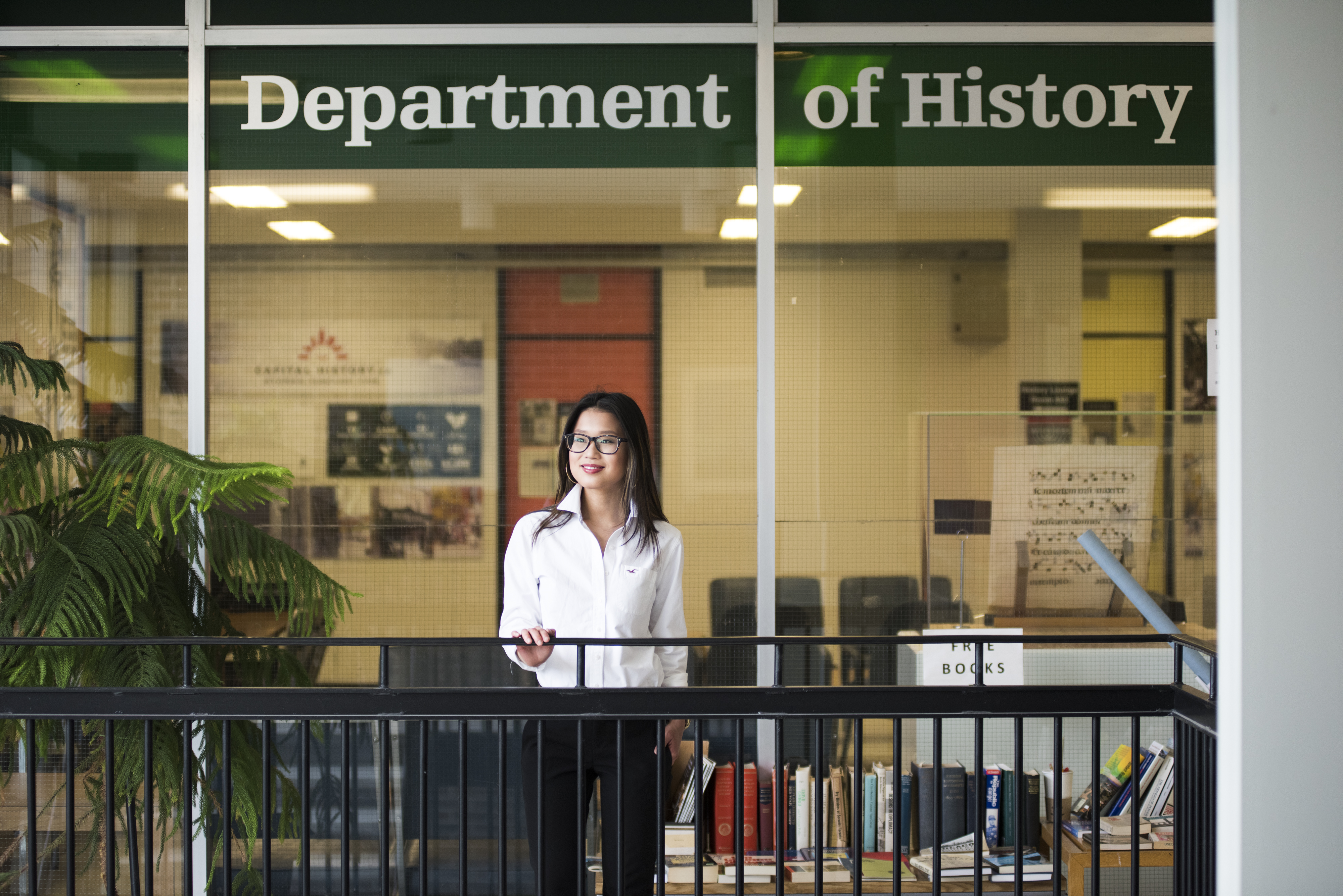 From Classroom to House of Commons

Lanthier’s foray into Canadian politics through Daughters of the Vote is but one of her many accomplishments. At Carleton University, she is a successful and engaged student, and she credits a lot of her growth to the meaningful relationships she cultivated as an undergrad.

“My experience at Carleton has been stellar. Carleton has offered me a superb academic experience – one that was also tempered by a personal aspect that you can’t always get at bigger universities. There’s a warm, encouraging, community vibe,” says Lanthier.

“The History Department, in particular, has always been tremendously helpful and supportive, which goes a long way as you deal with the daily pressure of being a university student.”

“I often speak with my friends who attend other universities, and the fruitful personal relationships I’ve made with faculty seem like a feature mostly unique to Carleton.”

Another feature mostly unique to Carleton is the First- Year Seminar (FYSM) courses — small classes devised to allow first-year students the opportunity to discuss and research topics of interest in a particular subject area. While most university students are not afforded this collaborative and intimate setting until third or fourth-year, Carleton BA students get this chance as soon as they begin post-secondary.

“Being herded into these huge 500 person classrooms can be a bit daunting. Taking an FYSM helped me adapt to the post-secondary lifestyle.”

Not only did her FYSM help acclimatize her to university life, but it allowed her to discover her research passion — the study of art, artifacts, and clothing.

“I have always loved fashion and material culture. I use it as a way to express myself and be creative, so to learn that this was a possible area of inquiry for my academic career was monumental for me,” says Lanthier.

For anyone who has met Lanthier, her zealousness for fashion, culture, and art is very obvious. History Professor Susan Whitney recalls the time Lanthier made a presentation in her class on Paris in the Jazz Age wearing a black dress that she deliberately chose as an homage to Coco Chanel. “She really would not have looked out of place in 1920s Paris,” remarks Prof. Whitney.

Throughout her undergraduate degree, Lanthier strategically took courses which correlated with her interest, and as she did so, she came to realize that in researching fashion, a lot can be understood about the broader social context in a given period — from politics to economic systems, to social change.

“I’ve been able to leverage my interests in fashion and art in a way that speaks to history and politics. Fashion is a captivating and enlightening lens to look at history,” says Lanthier.

“For example, in taking Paris in the Jazz Age with Prof. Whitney, I learned about the city of Paris as the historical pinnacle of fashion. In the course, I was able to write a paper on how material culture in the form of clothing and fashion could be an alternative way to explore the social, cultural, and political life in Paris during the first two decades of the twentieth-century. In particular, I focused on the rise of consumer culture, big fashion luxury brands, and how fashion was used as a marketing tool for the survival of the French Empire.”

“Professor Whitney’s mentorship and guidance has been so impactful on my academic trajectory. Her generosity, that extended well beyond the confines of the seminar room, helped me work through complex ideas and material that will prove indispensable for my M.A,” says Lanthier.

Currently, Lanthier is focused on the West’s relationship with the East as a way to explore ideas of nationalism, empire, colonial identities, and ‘Otherness’ on one hand, and Britain’s relationship with continental Europe, namely France and French fashion, on the other.

“There are so many Eastern influences in 19th and 20th-century Western fashion, and it made me want to dissect this dynamic — what exactly were these Eastern influences visually communicating to French and British society at that time?”

As Lanthier continued her research, she began to notice a gap in scholarship — historically, material culture hasn’t received the academic attention it warrants, especially fashion.

“Fashion is generally seen as this frivolous thing, not something with which serious historians generally engage.”

Lanthier also spoke with distinguished History Professor Norman Hillmer to ask for his thoughts, and he agreed with her assessment that fashion is an area of history ripe to be studied more. In fact, Prof. Hillmer sees it as a crucial subject to interrogate. With the unwavering encouragement of faculty in the History Department, this is precisely what Lanthier intends to do, as she has just been accepted to Queen’s University’s Master’s program in History.

“Continuing with all that I learned at Carleton, at Queen’s, I will study fashion material culture in the 20th century French and British Empires. I want to use fashion as a catalyst to explore the complex and often contentious relationships between Britain and France in the 20th century.”

“I plan to explore economic aspects, consumer market trends, gender relationships all through fashion and material culture and what they tell us about national identities and the global historical relationship between Eastern and Western empires,” she says.

Staying true to her core principles and beliefs which were recently sharpened through her involvement with Daughters of the Vote, Lanthier also aspires to use her specialized study to scrutinize gender and racial identities embedded in past and present political structures.

“Studying fashion creates a space for women to be studied — speaks to their identities, and also the political and social contexts of that time. Women’s fashion has always been political because it does not simply delineate East and West, masculine and feminine, white and black dichotomies, but reflects a whole set of racial and gender hierarchies and ideologies,” asserts Lanthier.

“Fashion has been a tool of oppression, but women have also used it to express themselves and their experiences. Similarly, contemporary engagement and re-engagement with non-Western cultures in the canon of fashion really speaks to the timeless role of fashion in the politics of national, racial, and gender identities.”

Although she loves to research and can see herself pursuing an academic profession, thanks in part to her Daughters of the Vote experience, Lanthier is very much considering a career in public service.

“If I choose to go the political route after completing graduate school, I’m interested in municipal or provincial politics — grassroots, visible types of change that affects everyday lives.”

With someone like Lanthier making her way into the political sphere, Canadians can rest assured that they have someone who can represent them both wholeheartedly and admirably.