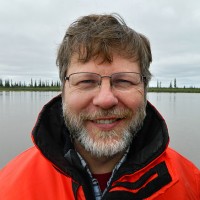 Chris Burn is the supervisor of Carleton’s Graduate Programs in Northern Studies. He held an NSERC Senior Northern Research Chair at the Department of Geography and Environmental Studies from 2002-12, throughout the program’s life. He came to Canada in 1981 as a Commonwealth Scholar, and completed both the M.A. (Geography, 1983) and Ph.D. (Geology, 1986) at Carleton. He then moved to U.B.C. as a Killam fellow, to study with J.Ross Mackay, the world authority in his field. In 1989 Chris was awarded an NSERC University Research Fellowship, which he brought back to Carleton in 1992. In January 2018, Chris was awarded a D.Sc. (Geography) by Durham University, after examination of his published research by an international panel. Most recently, Chris received the Polar Medal from Her Excellency Rt. Hon. Julie Payette, Governor General of Canada.

Chris is committed to long-term field investigations of frozen ground. His research is focused on the relations between climate and permafrost. He has been particularly interested in determining the response of ground temperatures and the active layer to climate warming as observed in the western Arctic since 1970. His program involves partnerships with several northern agencies, particularly Yukon Parks, Parks Canada, the Village of Mayo, Yukon and Aurora Colleges, and the Departments of Transportation in Yukon and NWT. Dr Burn has been involved with the environmental and regulatory reviews of several northern projects, including the proposed Mackenzie Gas Project and the Inuvik-Tuktoyaktuk Highway.

His research program strives to provide explanations for the behaviour of permafrost terrain that are founded in field verification of physically based models. Projects completed at Herschel Island relate the present ground thermal regime to climate change over the past 120 years. Fieldwork there has also shown how temperatures inside an ice cellar at Pauline Cove allow comparison between convective and conductive heat transfer. Long-term observations at the Illisarvik drained lake field experiment build on Dr Mackay’s work, and have just given an uninterrupted 40-year record of active-layer development that may be the longest in North America. Ground temperatures collected at Illisarvik confirm the effect of regional warming in winter on summer thaw depth. In central and southern Yukon data collection is primarily concerned with the effect of changes in surface conditions on ground temperatures, especially following forest fire in Takhini River Valley, near Whitehorse, and after thaw slumping, near Mayo. Graduate student projects are woven into the general program that covers these themes.

The work has primarily been supported by NSERC, PCSP, the Aurora Research Institute, and Transport Canada. Northern agencies also provide critical assistance, especially the Village of Mayo, Herschel Island Qikiqtaruk Territorial Park, and Tuktut Nogait National Park. Since 1992, 25 Master’s and five PhD theses have been completed in the program, with one Ph.D. thesis and one M.Sc. project underway. He has supervised eight Master students in the Northern Studies program.

Chris has served as Chair of NSERC’s Committee 186 (Scholarships and Fellowships Committee for Ecology and Earth Sciences, 2010); as Chair of the Canadian Northern Studies Trust Northern Science Committee for adjudication of Weston Awards for Northern Research (2007-11); as Vice-President of the Royal Canadian Geographical Society (2004-09); President of the Arctic Circle (2009-12); and Co-Chair of Transport Canada’s Network of Expertise in Northern Transportation Infrastructure Research (2011-14). He currently serves as co-chair of NSERC’s Committee 1506 (Discovery Grants for Geosciences) and is President of the International Permafrost Association.

In 2012 Chris edited a 242-page, multidisciplinary account of the natural and cultural history of Herschel Island, Herschel Island Qikiqtaryuk. The book is a partnership with 12 supporting agencies, involving 43 authors, 24 of whom live north of 60°.  It is lavishly designed and carefully copy edited to be accessible to a broad audience, ranging from community members to graduate students beginning their program.

Chris Burn is an internationally recognized expert in the domain of permafrost and ground ice in Yukon and the western Arctic. A professor of geography and environmental studies at Carleton University, he is equally adept at fostering meaningful and productive partnerships with relevant stakeholders in Canada’s North, ensuring a comprehensive understanding of the effects of climate change on permafrost terrain and tundra ecosystems.                   Photo credit: Sgt Johanie Maheu, Rideau Hall Her Excellency presents the Polar Medal to Christopher Robert Burn. Her Excellency the Right Honourable Julie Payette, Governor General of Canada, presented honours to Canadians in celebration of their exceptional achievements. The ceremony took place at Rideau Hall on November 5, 2018.

Burn, C.R., and Smith, M.W. 1990. Development of thermokarst lakes during the Holocene at sites near Mayo, Yukon Territory. Permafrost and Periglacial Processes, 1(2): 161-176.

Jennifer Humphries (M.Sc.): Management of snow conditions and its effects on permafrost, Hurricane Alley, Dempster Highway, Yukon. Jennifer is studying the wind regime at the Yukon-N.W.T. border, where blowing snow is a hazard to traffic on the Dempster Highway. She is conducting a field experiment using snow fences to trap snow and reduce accumulation near the road, and to examine the effect this has on ground temperatures. Her initial results point to the unusual lee side mountain winds in the area that create a snow pack of very high density.

Patrick Jardine (M.Sc.) Management of snow conditions and their effects on permafrost degradation beside the Dempster Highway, Yukon. Patrick is studying the role that snow management may have on the thermal regime of permafrost beside highways built on permafrost. He will be undertaking an experiment in the Blackstone Uplands that involves crushing snow accumulation beside the road embankment in order to raise snow density and hence lower its thermal resistivity. We anticipate that the ground will cool efficiently in winter as a result, and arrest permafrost degradation.

Emma Stockton (Ph.D.): Permafrost and infrastructure sustainability, western Arctic Canada. Emma is examining various aspects of the ground thermal regime along the Dempster Highway and Inuvik-Tuktoyaktuk Highway, including a comparison on conditions beneath and beside the road, the effect of soil moisture on ground temperatures, and the role of snow accumulation at the sides of the embankment. Her work is supported by the NWT Geoscience Office and Transport Canada.