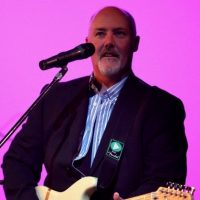 Frank was born in Glasgow, Scotland, into a family of professional musicians. At age 6, he was selected to attend the Royal Scottish Academy of Music and Drama. A few weeks later, three days after he turned 7, his family emigrated to Canada.

A versatile guitarist, drummer, singer and song-writer, Frank has toured, and recorded in Nashville, and played in New York City at legendary avant-garde venue, the Knitting Factory. Frank has played thousands of shows, in rock, country and jazz, in venues ranging from small rooms with less than a hundred-person capacity, to outdoor spaces performing in front of 35,000 people.

A few years ago, Frank’s guitar playing and singing made quite an impression on Nashville superstars, Keith Urban, and Brooks and Dunn. With their encouragement and with Johnny Reid’s help, Frank started making song-writing trips to Nashville.

“Time Flies” (co-written with Johnny Reid and Cyril Rawson) appears on Johnny’s Open Road/Universal CD Born to Roll. The song clawed its way up CMT’s Chevy Top 20 Countdown and it stayed on the chart for a number of weeks. It also made an appearance on CMT’s Top 20 “Tearjerkers” of all time, right next to Willie Nelson!

The publishing rights for the song allowed Frank to return to school to complete a BMus, at Carleton University, where he also has completed the coursework for the MA in Music and Culture. Frank served three years as a Teaching Assistant in music theory, for which he earned a CUSA “Teaching Excellence Award” and Music Department “TA of the Year” awards.

Frank has taught both, guitar students and singer/songwriters, in the Music Department at Carleton since 2012. An energetic teacher with a refreshing pedagogical style, he has an innate ability to impart information and his experience, allowing him to succeed with students where others have not.