Some of our current students’ bios and research interests…. (April 2019)

Gerard (Mc Mahon) Brathwaite-Sturgeon has accumulated almost 22 years of experience in the areas of international trade and investment, consular and management services, and international development assistance with Global Affairs Canada. His overseas assignments have included Georgetown Guyana, Minneapolis Minnesota, Port of Spain Trinidad, and Washington DC. In addition, he has worked as an investment officer with the Ontario Ministry of Economic Development, Employment and Infrastructure. Prior to joining the foreign service, Gerard was employed as a management training consultant, and worked as an industrial engineer for companies such as Estée Lauder, Jacuzzi and the Ministry of Transportation, Ontario. He also successfully ran his own printing franchise business.
He remains a part time lecturer at the University of Ottawa and more recently has also been teaching at Algonquin College. Over the years he has taught at Loyalist College, Queen’s University, Ryerson University, and Sheridan Institute of Applied Arts and Technology.
His qualifications include: BTech in Industrial Engineering and Certificate in Mechanical Engineering Technology (Ryerson); MBA and MEd (Ottawa); MASc (Waterloo); MA (Johns Hopkins); MSEd (Medaille); MTS and MDiv (Theology) degrees (Queen’s); and MPNL (Carleton). He also holds a Certificate in Global Trade (St. Peter’s College, Oxford University & George Mason University). He is currently pursuing a Master of Music and Culture degree at Carleton University.
Last, Gerard is a registered primary junior school teacher with the New York State Education Department and the Ontario College of Teachers (OCT). 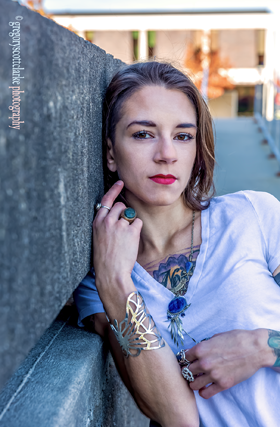 Graduating from Carleton University with a Bachelor of Music and Bachelor of Arts in Religion River Doucette continued into the Carleton University Music and Culture Graduate program. Now in her second year, a musician and visual artist with various forms of synesthesia (namely chromestheisa and auditory-tactile synesthesia), she continues to concentrate her studies on the study of synesthesia in its potential to be learned or activated by non-clinically diagnosed synesthetes. Her interests have extended to a focus on exploring how the multisensory experiences of synesthesia and matephoric use of synesthesia as artistic strategy in performance attributes to creative cultivation and wellbeing in the contexts of both performance and reception.
As a beat-box flutist she combines multiple genres, combining cyclical-like breathing and extended technique to produce experimental- instrumental work inspired by social and environmental themes.
As a visual artist, Doucette paints to music in live performances as well as produces and exhibits socially and politically charged mixed-media canvas pieces often associated with the concepts of identity, reclamation of space, connections to land and fantastical realms.

Ty Hall is a 2nd Year student in the MA in Music and Culture at Carleton University. As an active musician in the Ottawa music scene and aspiring academic, Ty balances his love for performing with his research that explores issues of race, gender, and representation in popular music. With several appearances on the conference circuit over the past year, his work focusing on intersections of hip hop and Afrofuturism has been met with great enthusiasm.
Upon completing his master’s thesis on Atlanta trap music and the current directions of Afrofuturism, Ty is planning to continue his studies in the Cultural Mediations PhD program with a concentration on music culture at Carleton University in 2019. 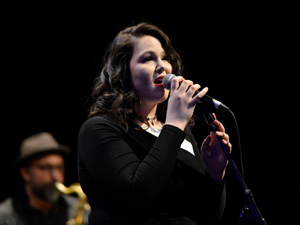 Having graduated from Carleton University’s Bachelor of Music (Honours) program with a focus in Jazz Vocal Performance, Lucia Iacovitti-Villeneuve decided to pursue the next stage of her academic career in the MA in Music and Culture program at Carleton University.
Throughout her performance undergraduate degree, Lucia has had the opportunity to perform at a variety of different functions, such as the TD Ottawa Winter Jazz Festival alongside Juno Nominated Saxophonist Petr Cancura, and Carleton University’s 75th Anniversary Celebration at the beautiful Chateau Laurier.
Lucia has also been very fortunate to participate in vocal masterclasses conducted by Juno Award winners Jeri Brown and Kellylee Evans. During her time in the MA program at Carleton, Lucia wishes to study the influences of Indigenous popular music, specifically the music of the Iqaluit based band “The Jerry Cans”, and how their musical output may reaffirm cultural pride and Inuit language practices in Inuit communities. 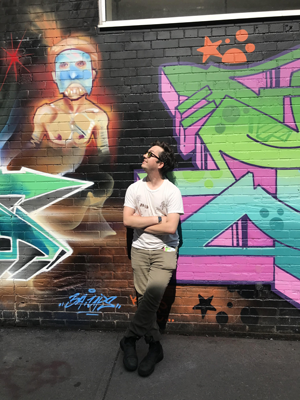 After completing his bachelor’s degree in Music Composition at Brandon University, Jakub arrived at Carleton’s Music and Culture program to study subculture and popular music. Under the supervision of Dr. William Echard, his thesis project examines the intersections of music, art and politics in the Toronto punk/new wave scene of the late 1970s.
Drawing on the work of scholars in the fields of popular musicology, subcultural theory, art theory/criticism, sociology and neo-Marxist theory, Jakub has an eclectic and interdisciplinary approach to academic work that bridges intellectual rigour with an ‘insiders’ sensibility towards counterculture.
In the summer of 2018, Jakub held a contract at the Toronto Arts Foundation, where he helped execute the community engaged Arts in the Parks initiative. In the future, he hopes to continue building a profile as an arts administrator and professional in the non-profit sector. 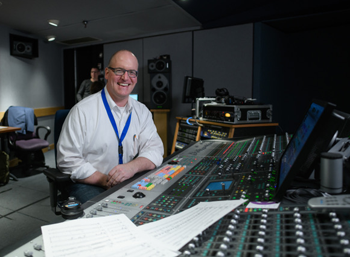 Adrian Matte is a first-year Music and Culture MA student. His broad research interests include: the film scores of NFB composer Eldon Rathburn, Improvisation Studies, and collaborative Research-Creation projects. His MA thesis will focus on the Art Ensemble of Chicago’s soundtrack to the avant-garde film Les stances à Sophie (1971) directed by Moshé Mizrahi and adapted for the screen by French feminist author Christiane Rochefort from her 1963 novel of the same name. Adrian received a B.Mus from McGill University in 1996 and was one of the first Canadians to study Voice Movement Therapy in Cambridge MA with founder Paul Newham in 1998-99. He has over two decades experience as a self-employed musician and is a veteran instructor from the now defunct Ottawa Folklore Centre. He currently teaches two jazz combos at Alcorn Music Studios. He plays guitar, saxophone, and electric bass and has extensive experience performing in styles as diverse as Reggae, Afrobeat, Bluegrass, Blues, Rockabilly and Folk and more, as well as Jazz from big-band and swing to free improvisation.
His most recent recording project, co-produced with Allyson Rogers, is the CD The Romance of Improvisation in Canada: The Genius of Eldon Rathburn released in November 2018 by Justin Time Records. Led by saxophonist Petr Cancura and featuring some of Canada’s best jazz musicians, the band will be performing at the TD Ottawa Jazz Festival on Sunday June 23, 2019. Adrian’s current project is the MFW Trio, with bassist Mark Fraser (Pimienta Blanca, Jaaji Okpik’s Twin Flames) and drummer Scott Warren (Rakestar Arkestra). The MFW Trio is currently in studio, recording material in collaboration with local visual artists, whose artworks are the inspiration for group improvisation. Adrian also plays tenor saxophone with the Georgian House Orchestra.
In his free time Adrian is dedicated to crafting homemade preserves and ferments, restores vintage Raleigh 3-speed bicycles, and is currently rehabilitating a 16-foot Norwegian Olsevar-type wooden sailing/rowing boat from the 1960s. He lives in Ottawa with his wife and three children. 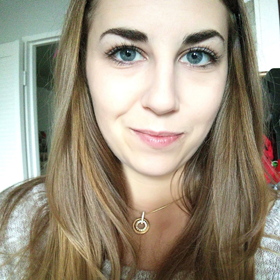 Samantha is a second year MA student whose research explores the dynamics of audience affect and participatory fandom, specifically looking at the role of nostalgia in Video Games Live performances in the city of Ottawa. She also performs work in critical disability studies as a research assistant looking at film representations of muteness.

And, Congratulations to the following MA students (or recent graduates) on receiving student paper prizes at recent academic conferences!