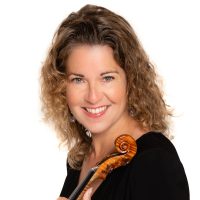 Sara Mastrangelo is an avid performer, violin teacher and string ensemble coach. She has been a member of several orchestras: first violin in Flint, MI, concertmaster/section of New World Symphony in Miami, first violin with the Syracuse Symphony Orchestra for twelve years, and since 2013 she has been first violin of Ottawa’s Thirteen Strings and regular substitute violinist with the National Arts Centre Orchestra.

Mastrangelo is active as a chamber musician, performing regularly at Music and Beyond (Ottawa), Skaneateles Music Festival (NY) and spent many summers as principal second of the Breckenridge Music Festival (CO). Other music festivals include Tanglewood (MA), Banff, Schleswig Holstein (Germany), Bach and Beyond (NY) and Domaine-Forget.

When not teaching, practicing, rehearsing or performing, Mastrangelo can be found running a busy household with two musical teenagers and her husband, violinist Jeremy Mastrangelo.