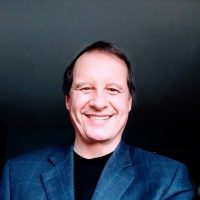 Yves Laroche has worked since 1993 as music director and a jazz and classical piano teacher at the Bells Corners Academy of Music in Ottawa, overseeing an intensive jazz ensemble program and a highly popular summer jazz camp. Yves studied with Dave Hildinger and Douglas Voice, among others. He is a Performance Instructor in Jazz Piano at Carleton University and Carleton Jazz Camp, and has been a part-time faculty member at the School of Music at the University of Ottawa for over 20 years, teaching Arranging and Jazz Ensemble. He also appeared as guest performer at an alumni gala concert, and has performed at convocation at Saint Paul University. As well, he has lectured on jazz harmony and improvisation.

In 2007, he received a Great Grant Award from the Trillium Foundation for his excellence in jazz education at the elementary school level. Yves Laroche helped establish jazz programming for Café Nostalgica and the Jazz Vespers Series at All-Saints Anglican Church in Westboro. As well, he has adjudicated the jazz band categories for the Rhythms Festival and MusicFest. On three occasions, he has adjudicated amateur music grants for the City of Ottawa. Over more than two decades, Yves Laroche has performed at major events, including the Ottawa International Jazz Festival, the Tulip Festival, the Festival Franco-Ontarien and the Canadian Grand Masters Fiddle Championship. His television appearances include The Rita McNeil Show, Chez-Nous and The Morning Show. He also worked as an arranger for CBC Radio’s Ottawa In Concert featuring Vanessa London. Recently, his jazz composition “For Oscar” was aired on the CBC Radio jazz music program Tonic. Yves Laroche has performed with the Ewashko Singers, the Cantata Singers of Ottawa, Capital Vox and the Orpheus Theatre Company, and he was musical director and pianist for the National Art Centre production of Angel Square by Brian Doyle.

His vast musical theatre experience includes productions of Jesus Christ Superstar, Godspell and Once Upon A Mattress. As a jazz sideman, he plays regularly with the Pollcats, the Peter Liu Trio, the Rick Rangno Project and the Doug Martin Quartet. He regularly plays private engagements at Rideau Hall, the Rideau Club, and the Chateau Laurier, and is featured at the Brookstreet Hotel, Zolas and Vineyard’s Wine and Bar Bistro. Yves is a 30-year member of the Ottawa-Gatineau Musicians’ Association Local 180.