The Institute of Political Economy welcomes all to attend an upcoming on lecture on November 8, 2017 by visiting professor, H. Simten Coşar. 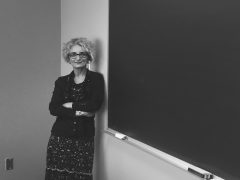 Human history has hosted periods when writing turns out to be a seemingly futile endeavour. This is so especially when the brutality of the reality is ever more clear, and when the facts speak for themselves, denying the mediation of the words. And the words, seem to be pushed to the back stage since they either fail to grasp the brutality of the reality and/or they are silenced by the authorship of real politics. This talk takes issue with such times, generally named as times of fascism, trying to understand the state of academic writing and the possibilities to forge alternative academia through persisting in the power of writing as a form of resistance.

Formerly of the Faculty of Communication at Hacettepe University in Ankara, Turkey, Professor Coşar has returned to Carleton to teach two courses this term: Feminism, Peace, and War: Intersectionalities for Political Economy, and The Political Economy of Everyday Academic Life for the Department of Sociology and Anthropology.

Professor Coşar co-edited Universities in the Neoliberal Era: Academic Cultures and Critical Perspectives, a book on the recent transformation in the universities, and Silent Violence: Neoliberalism, Islamist Politics, a book that explores contemporary Turkish politics by problematizing the synthetic articulation of Islamist politics with neoliberal capitalism during the JDP’s decade-long rule. The contributions analyze the policies of the AKP regime in order to understand the changes in Turkish Society.

She has performed research in the Department of Women, Gender and Sexuality Studies at the University of Massachusetts, Amherst, focusing on neoliberal transformation in universities. Professor Coşar is involved with feminist political activism throughout the world and has published papers such as “Women in Turkish Political Thought: Between Tradition and Modernity”, which explored the patriarchy in Turkish political thought.