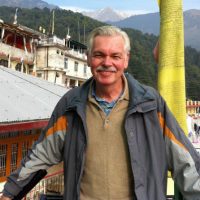 Stephen Inglis was Executive Director of the Aanischaaukamikw Cree Cultural Institute from 2010 until 2015.

Before joining this leading First Nations organization, he was researcher, curator and then Director-General of Research and Collections at the Canadian Museum of Civilization, responsible for the content areas of Canada’s national museum of ethnology and history.  During this time he helped create an international reputation for the museum and developed an extensive network of national and overseas partners, leading to major acquisitions and travelling exhibitions.  He personally curated 10 major exhibitions and supervised the development of dozens of others.  He contributed extensively to the museum’s research and collections of folk and popular art, fine craft, and ethnic studies.

Since completing his PhD in anthropology at the University of British Columbia, Stephen Inglis has continued his research, publication and teaching on South Asia, lecturing at universities and participating and organizing conferences internationally.   He has taught both Anthropology and Art History at Carleton and, since 2015, has been closely involved with the Curatorial Studies Program.

Stephen Inglis’ contributions to museums and to Indian studies have been honoured by the Canadian Museums Association, Hans Mannerby Foundation of Sweden, Shastri Indo-Canadian Institute, and the Government of India.­