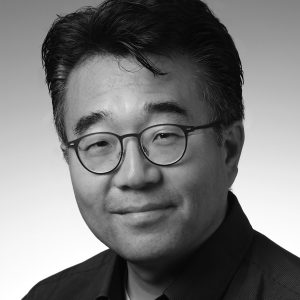 Dr. Chung is an industrial designer and design educator interested in developing pedagogical methods, materials, and techniques to enhance students’ design competency that meets what the 21st century asks for. He received a Ph.D. degree from the Institute of Design, Illinois Institute of Technology (IIT) in Chicago where he focused on developing a theoretical framework of early prototype use to foster design collaboration, and an M.A. degree from Industrial design department at the Ohio State University and a B.A. from Konkuk University in South Korea. Dr.Chung started his design career as a kitchen furniture designer at ENEX in South Korea and worked as a design intern at Battelle Memorial Institute in Columbus, Ohio and LPK in Cincinnati, Ohio.  While pursuing his doctoral degree at the Institute of Design, IIT, he also taught a foundation course, called “Introduction to Product Design” for non-design background students. He joined Carleton’s design program in 2007 and is currently an associate professor and a graduate program coordinator.

Dr. Chung’s research focuses on developing pedagogical methods to enhance students’ individual and collective creativity through the reflective and the abductive thinking process, the theoretical background of convergence design and design ethics for future designers.

One of his main research areas includes investigating the fundamental mechanism of design practices. For instance, he argues that interdisciplinary collaboration is not always guaranteed to produce productive results if its theoretical, institutional, and educational aspects are not well-defined. Based on this argument, he has developed a theoretical framework of an effective group collaboration by employing the notion of Activity Theory. Furthermore, he investigated the theoretical framework of metaphor for product designers and proposed its syllogistic configuration, “A is to X what X is to B,” where X refers to the attributes of a given metaphor.

Another research area he is interested in includes the implications of improvisation in facilitating collective creativity during a design process and the theoretical mechanism of designers’ mediums for creativity such as sketches and prototypes. Recently, he is researching on the role of the 21st-century designers as collaborative personnel creating the potential demand of various social sectors such as medical, finance, education, leisure, shopping, and entertainment, etc.

His research endeavour led him to be invited to participate in several government-funded projects in Korea that allowed him to establish a partnership with a number of prestigious industry partners as well as design universities in Korea.