Law and Legal Studies Professor Melanie Adrian has been recognized for her academic and volunteer work with a Senate 150th  Anniversary Medal as well as a Canada 150 commemorative pin.

The pin was awarded on November 22nd by MP and Minister of Environment and Climate Change Catherine McKenna. It was presented to Ottawa Centre residents who “carry out the Canada 150 themes of diversity and inclusion, reconciliation with Indigenous peoples, youth and the environment.”

The Senate 150th Anniversary Medal was presented on November 29th by Senator Vernon White. It was awarded to “Canadians who are deeply involved in their communities and whose generosity, dedication, volunteerism and hard work make their hometowns a better place to live.”

“I am humbled to be included amongst this incredible group of recipients and delighted that the good work of Scholars at Risk and Be the Choice is being celebrated,” said Professor Adrian.

Among her many accomplishments, Professor Adrian was instrumental in starting a chapter of the Scholars at Risk network in Ottawa in 2013 in collaboration with the University of Ottawa. Carleton and U of O have since jointly hosted three Scholars at Risk.

Professor Adrian is also one of the founders of Be the Choice (bethechoice.org), a non-profit organization dedicated to making breast cancer treatment information accessible and participatory through an interactive, fully bilingual, digital platform that enables patients and their advocates to navigate the labyrinth of clinical terms and pathways that accompany a diagnosis. The platform was launched in June of 2017 and has helped hundreds of patients. 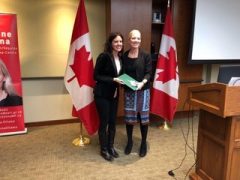