In 1967, the Department of Law and Legal Studies emerged as the first unit in Canada to study law within an interdisciplinary context. Since then, we have grown to offer the largest and most extensive undergraduate and graduate programs in legal studies in the the country.

In 2017, we celebrated not only Carleton University’s 75th anniversary, but the 50th anniversary of our department as well. We invited past and current staff, faculty, contract instructors, students, alumni, and other esteemed guests to join us in celebration of 50 years of excellence and innovation!

Meet some of our graduates! Find out what careers they have achieved and how a B.A. Law degree led them to success!

In honour of this important milestone, the Department of Law and Legal Studies collected funds towards the 50th Anniversary Undergraduate Scholarship. The scholarship awarded deserving undergraduate students in a Law program at Carleton University, proceeding from one year of study to the next. It is our hope that this fund will provide much-needed financial support to allow bright and deserving law and legal studies students to flourish at a critical moment in their undergraduate careers.

An Awards Committee comprised of department faculty members evaluated candidates who contributed to the standards in excellence and innovation on which our Department was built. Candidacy will be determined and evaluated based on:

(a) level of academic standing;
(b) commitment to education and advances in research;
(c) involvement in co-curricular activities

Some of our current students have put together a campaign video to discuss the types of student opportunities and achievements, and to reflect on the impact of community support:

A special reception with warm greetings from the President Runte and the Department’s Chair, Ron Saunders, to kick off our anniversary celebrations. Thanks also to our Guest of Honour, the Right Honourable Beverley McLachlin, Chief Justice of Canada!

View the Chair’s Welcome Message , presented at this Launch. 2:00 PM – Rethinking Justice in and Beyond Trials

3:35 PM – The Role of Law in an Era of Reconciliation: Identity and the Tensions of Being and Belonging 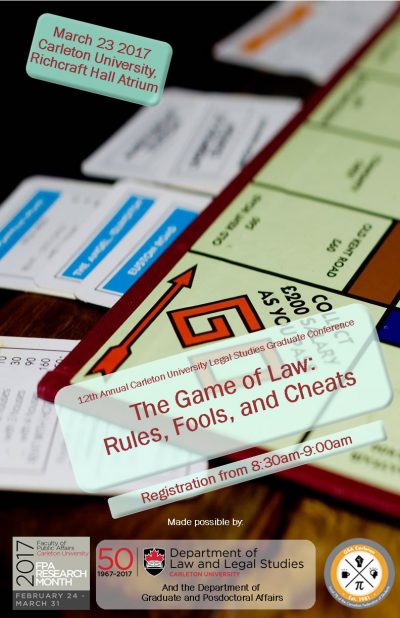 An interdisciplinary graduate student conference on the subject of “The Game of Law: Rules, Fools, and Cheats”.

This event was in association with CU75 celebrations and FPA Research Month.

An event featuring a panel of alumni, followed by a student Q&A and networking reception!