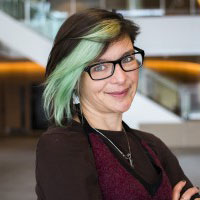 I recently won SSHRC funding for a new project in collaboreation with Dr. Rashmee Singh (Waterloo). Dr. Benjamin Berger (York), and Dr. Kelly Gates (UCLA). We take up theoretical questions about narrative and artefacts by looking substantively at the role of photographic evidence of victim’s injuries in cases of interpersonal assault. In this project we draw on feminism, queer theory, Actor-Network Theory and cultural studies to explore the relationships between victim’s own ‘stories’ and the ways in which photos of their bodies are used to narrate how their injuries were acquired.

This project builds on my previous work concerning the constitution of criminalized subjectivities, explored through the lens of drug treatment courts. I have an ongoing interest in the ‘characters’ of criminal justice and the ways in which people are made up in order to be governed.

I also continue to be interested in questions of political and public engagement. I am following up my previous work with Mike Mopas on public criminology, this time critically exploring recent activist movements around prisoner’s rights with an eye to considerations of feminist and anarchist engagement with public criminology.

Finally, I am working in collaboration with a number of feminist prison scholars across the country on what we are terming the ‘Prison Transparency Project.’  Our focus is on how prisoners experience imprisonment as well as exploring both major and minor human rights abuses within carceral regimes.

Presently I teach the PhD field seminar on theory and crime control as well as a third year class on punishment. In the past I have taught research methods, a fourth year seminar on drug regulation, first year legal studies and the graduate seminar on law, crime and social control.

I supervise theses at the graduate level in Legal Studies, Sociology, Political Economy and Social Work. I am a ‘hands on’ supervisor best matched to hard working and self-disciplined students interested in doing theoretically driven and empirically grounded research.

I am willing and able to supervise in the following areas.