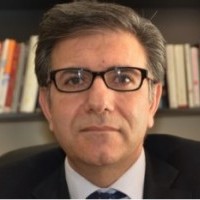 Mr. Raeesi has practiced Criminal and Human Rights law in Shiraz, Iran for 20 years and served as a board member of the Fars Province Bar Association for two terms.  He was the founder and former head of the Human Rights Committee of the Fars Province Bar Association for eight years. He is also the founder of Neday-e Edalat (The Voice of Justice) Legal Association in Shiraz.  He is no stranger to teaching aspiring lawyers such as during his tenure as part-time Lecturer at Azad University of Shiraz.  He has also taught online classes on issues related to Iranian Islamic law both in Iran and in Canada.

In his practice as a lawyer, as pro bono counsel, he has defended political prisoners, journalists, women, LGBTQs, minorities, students and children who were sentenced to the death penalty. In this regard, he has been credited with winning several high profile cases dealing with controversial issues like capital punishment, stoning of women, child executions, religious persecution, domestic and gender based abuse, discrimination and much more.

Given the high-profile cases he has worked on, he came under the scrutiny and pressure of the Iranian government leading to his immigrating to Canada. In Canada, Mr. Raeesi continues to advocate for human rights issues, being a go-to legal expert on issues of criminal law, criminal procedure, and their effects on criminal justice system and civil society. As a consultant on foreign legal issues, he has been working with the Office of the United Nation High Commissioner for Human Rights (OUNHCHR), and Amnesty International. He has written many legal commentaries on the protection of human rights in the administration of criminal justice on topics such as torture, brutal punishments, death penalty and the need for focus on restorative justice. His academic and legal career has focused on the study and practice of Islamic Laws (also referred to as Sharia Law), children’s rights, and women’s rights, including domestic violence. He has provided expertise on Islamic Laws in my various roles in Canada and in Iran where he was a legal expert and an expert witness. His most recent areas of research are Children’s Rights, Capital Crimes, the Islamic Legal System, Sharia Law, and the Islamic Criminal Justice System.

In 2015, Mr. Raeesi was selected by a joint committee of University of Ottawa and Carleton University to be their one-year In-House Scholar and Visiting Professor. In this role, he appeared at several speaking engagements and weekly panels, and conducted various research projects. He also teaches a comparative course on human rights within Sharia law and Islamic legal systems.

Prison Journal of a Child Bride, Guernica a Magazine of art & politics, (US, New York, August 2014)

Chronicle of an Execution, Legal Commentary on execution in Iran, (IRANHRDC US, New Haven, 2015)