Music student Rebecca Cowal holds a small sound mixer up to her webcam and points somewhere off-screen towards a new microphone setup.

“I had no idea. I didn’t know anything about sound recording, or live sound for that matter,” she admits over a Zoom call from her bedroom, now doubling as a home studio.

Cowal is entering her 4th year of the Carleton Music program this fall. But first, for a few weeks over the summer, the saxophonist has participated in an experimental project with faculty, instructors, ensemble directors, technicians, and fellow students to prepare for the realities of learning and playing music online.

The project has been dubbed OMER (Online Music Ensemble Research) and was spearheaded by Professor and Helmut Kallman Chair for Music in Canada Ellen Waterman. It’s one of 59 projects funded through Carleton University’s COVID-19 Rapid Research Response Grant initiative, and has received additional support from the Faculty of Arts and Social Sciences and School for Studies in Art and Culture.

When the University called for proposals, OMER Project Director Prof. Waterman seized the opportunity to pull Carleton’s expertise together. Instead of lamenting the loss of in-person interactions and music-making, she and the team are hopeful and optimistic.

“It’s less of an unhappy sacrifice, and more of an opportunity to do something brave and exciting.”

The main purpose of OMER is to rework Carleton’s jazz and choir ensembles and applied rhythm class for an online format. Prof. Waterman says the goal of the summer experiment is not to invent new technologies, but to respond to the question: “What is the ensemble experience, both pedagogically, and in terms of affect, emotion, intimacy, and community building?” 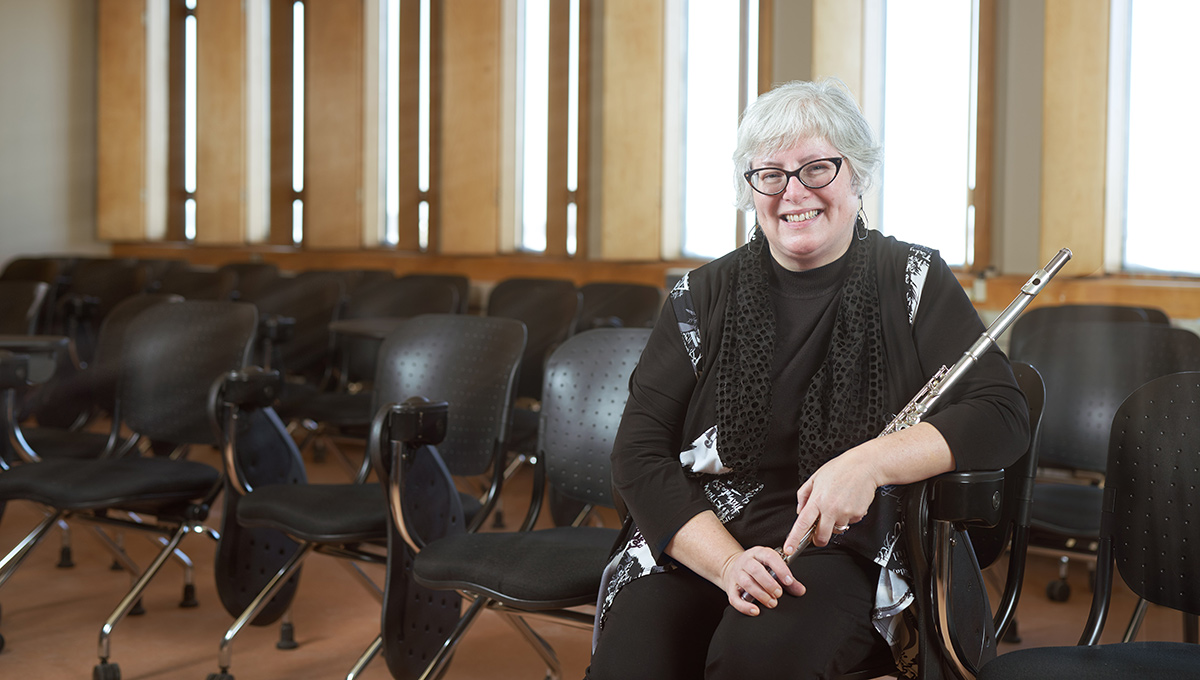 The Risk of Not Finding a Solution

The team’s proposal stressed that ensemble music pedagogy develops core skills such as listening, timing, expressiveness, and teamwork, and so an effective methodology for online choir, band and ear-training was urgently needed.

The risk of not developing such a methodology for real-time online musical collaboration is all the more significant because making music together is a primary motivation for students to undertake post-secondary music studies.

“In academic theory and musicology courses, we don’t really play too often, so the ensembles are hugely important – it’s where it’s at,” says Cowal. “So I think the OMER project is really putting a lot of time and effort into trying to deliver those ensembles in a way that still offers that camaraderie and collaboration, and makes you feel like you’re part of a community.”

OMER’s timeline was carefully planned out and began with a preliminary literature review and testing of technologies in June and July, followed by three weeks of Lab Ensemble, wherein strategies were tested through three ensemble case studies: choir, jazz, and applied rhythmic training.

The primary software programs the team has used are Zoom, SoundJack, BandLab, My Choral Coach and JamTaba. Some of the initial options explored were promising new technologies three months ago, but no longer exist.

“People have been trying to do remote online ‘real-time’ jamming since the early days of the internet, so there is a lot of info to go through and refine,” says John Rosefield, audio specialist with Carleton University Event Support and member of OMER’s research team.

Rosefield teaches a Live Sound course for the Music program, and was asked to test out synchronous (real-time) software solutions for OMER’s lab ensembles. He says he arrived at SoundJack after exploring nearly ten other platforms.

“I was looking at everything through the filter of ‘is this software cross-platform’, ‘is it accessible for all, minimal to no cost, open source’, and ‘is it user friendly’.  We needed to find something that could be deployed out to all students fairly easily and seamlessly,” he says. 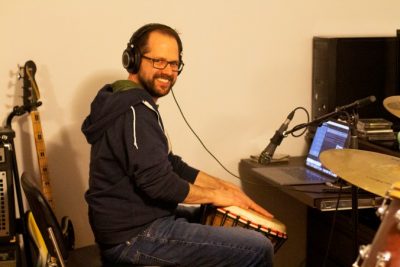 When he looked into SoundJack, it seemed to check all the boxes. The program uses ‘peer to peer’ connections, so every participant connects individually to every other participant.

“SoundJack is the only platform I’ve used so far that gives the user access to controls at the input stage, at the network stage and at the receive stage of the signal,” he explains.

This means that buffer settings can be adjusted to compensate for variances in the unique way  that digital information is being sent from and received by each connected participant.

“From a sound engineer’s standpoint, this is advantageous because I can connect to a session and have up to 16 individual feeds into my mixer, allowing me to record or potentially remix and re-broadcast the session,” he adds.

Use Up/Down Arrow keys to increase or decrease volume.

As for the downsides, Rosefield says they’re more or less the same across any platform of its kind. For the average at-home setup without powerful connectivity, the team’s top two technical concerns are inevitable: latency and packet-loss.

“The biggest wild card is the public internet,” he says. “The bandwidth is constantly fluctuating depending on internet traffic so it’s very hard to determine if a problem is hardware or software based, or if it’s a problem with the internet.  Optimizing people’s setups and troubleshooting problems with them has been challenging and time consuming, but also rewarding when we finally get things up and running in a very usable manner.”

Prof. Waterman, a flutist specializing in creative improvisation, is no stranger to performing in real-time online via heavy-duty servers.

“I’ve stood in a concert hall at midnight in Newfoundland and performed with a musician on stage at Stanford University at 8 p.m.,” she says.

The rapid speed of development in networked performance software, including a ‘gold standard’ low-latency program called JackTrip, could mean further options for the team, and by extension Carleton’s Music program, to explore. JackTrip was once only practical for superfast institutional connections like Internet2 and CANARIE, but is now available for wider, “at-home” use.

“What’s exciting right now is there’s so much demand for networking programs that they are evolving rapidly. Our plan is to create a JackTrip server that we can connect to at Carleton from our ordinary home internet connections,” she explains.

In the meantime, the reality of latency and packet-loss are central topics for OMER participants. While mitigation efforts, like using an ethernet cable rather than a Wi-Fi connection, have been explored, the team has embraced technical glitches as teaching and learning tools.

“We’ve had a lot of conversations about patience,” says Waterman. “For new students, we’re going to have to be calm, patient, loving and generous in our approach to helping them get up to speed. The lab ensemble members came up with the lovely idea of peer-mentoring for first year students.”

One way the team has sought to ease the transition, and compensate for some of the unique challenges of real-time virtual music collaboration, has been to design exercises around some of the limitations of existing popular videoconferencing software.

“Improvisation is the musical way that we can be most flexible,” she says. “But for jazz musicians, for example, they’re all about the rhythm section, and soloists typically improvise over four or eight bar chord changes. This online, synchronous experience is asking our musicians to let go of groove, something very sacred to them, in an alien environment where it’s often difficult to hear and see each other. The fact that they were able to play jazz standards together with Ed Lister calling out the solos and joining in on trumpet during the final rehearsal in SoundJack was super exciting!”

Through the OMER project, Cowal is exploring free jazz for the first time in her degree, and says the unique online platforms and performance conditions are helping her grow as a musician.

“It’s interesting to learn how to adjust to the delay, and finding out how we can use that in an artistic way,” she says.

Soon, Waterman says the team will have a clearer picture of what “a successful set-up” looks like and what will work from the perspective of the students’ home equipment and environment.

“This had to be about real-world conditions, and that includes ‘I live in a one-bedroom apartment’. Or ‘I work full time and go to school’,” she says.

For Cowal, the real-world conditions at home with her family have caused some tensions.

“Our walls are very thin, and saxophone is very loud,” she says, adding that she’s a morning practicer and used to travel to the University early each day to play.

“I have a 16-year-old brother, so finding a routine and compromising with my family members has created a bit of conflict,” she laughs. “One morning I actually went to a park and practiced, which was wonderful.”

For ensemble directors Armstrong, Lister, and Llaca, these summer case studies are meant to expose and work through challenges, while opening pathways for new opportunities to connect with their students, push boundaries, and inspire independent learning.

“I asked the Directors to tell me about their pedagogical goals, and one thing Antonio told me was he’s excited to see students take responsibility for learning their parts offline, and practicing accountability. That goal becomes, pedagogically, to help build an independent learner and a more responsible musician,” says Waterman. “One advantage of the online environment is that students are becoming proficient with basic sound recording and mixing.”

Before the OMER project, Armstrong says she didn’t know if there was a viable way forward for her rhythm class.

“My own style of teaching favours learning in community…where we usually drum, clap and speak patterns together in the same room. Spending dedicated time this summer with our lab students exploring, struggling and learning together was an empowering collaborative experience for us all,” she says.

Through the online sessions this summer, Armstrong says she’s developed teaching strategies such as one-way synchronous conducting, body percussion and rhythmic solfège speaking, along with individual creative projects and assignments on BandLab, where students will mix their own work in a Digital Audio Workstation (DAW).

“We have all acquired many new technical skills, and I feel energized to bring that sense of purpose and connectedness we shared in this project into my teaching during the academic year,” she says.

The second stage of the project will be for the team to take a step back, look at all the recorded data, notes, anonymous feedback surveys, and to make plans for the fall. Waterman says a tool kit for the project will go online, including a literature review, resource links, and documentation of the three case studies.

“In the fall, I’ll put my ethnomusicology hat on, and we’ll do participant observation with the ensembles, take notes, interview students, and document rehearsals.  In the end we’ll have a really good snapshot of what it’s like to play in an online ensemble through an entire course,” she says. “We’re also making opportunities for the lab ensemble participants to continue with the OMER research through peer-mentoring, practica, and a specialized studies course on networked music performance.”

“Nobody’s done a sustained study of online music ensembles before,” she adds.

In the future, once in-person interactions for music students are re-established at the university, Rosefield doesn’t think online music making will be shelved.

“In fact, I think what we are exploring now in the world of online collaboration will become a standard part of the way we operate when face to face returns.”

The OMER project is, in part, a response to difficult and unprecedented circumstances for university students, instructors and faculty. But the team agrees there is much to be gained from this collaboration.

“Musicians are brilliant,” says Rosefield. “They tap into their creativity and express it through the skills they have refined on their voice or instrument. Helping students understand the technical language, and to be able to recognize advantageous or problematic setups that could negatively or positively affect their music, will make it easier to work together to bring their creations to life, and to an audience.”