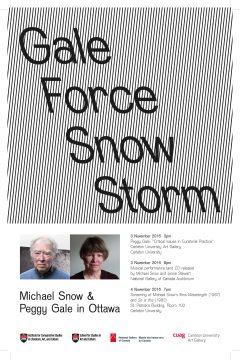 “Gale Force Snow Storm” will bring two luminaries of Canadian culture to Ottawa: curator/writer Peggy Gale and visual artist/filmmaker/musician Michael Snow. A recipient of the Governor General’s Award for Visual and Media Arts (2006), Peggy Gale will reflect on her decades of experience as a curator of contemporary art at 3pm on November 3rd at the Carleton University Art Gallery. Later that day at 8pm, Governor General’s award-winning interdisciplinary artist (and officer of the Order of Canada), Michael Snow, will perform in a duo setting with Ottawa percussionist Jesse Stewart at the National Gallery auditorium. The concert will mark the release of a compact disc recording by the duo titled “Live at the National Gallery.” On Nov 4 at 7pm, there will be a screening of Snow’s landmark experimental films Wavelength (1967) and So Is This (1982) in room 100 of the St. Patrick’s Building at Carleton University. All three events are FREE and open to the public.