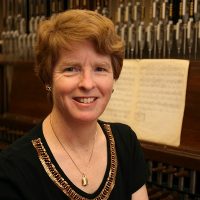 Dr. Andrea McCrady was named Dominion Carillonneur in 2008. She plays the Peace Tower Carillon every weekday and on request to serve Parliamentarians. She began playing the carillon in 1971 as an undergraduate at Trinity College, Hartford, CT (B.A., 1975). While studying in Europe on a Thomas J. Watson Traveling Fellowship (1975-76), she studied at the Dutch Carillon School with Leen ’t Hart, as well as at the Royal Carillon School in Belgium and at the French Carillon School. While attending medical school at McGill University, Montreal, 1976-80, she was carillonneur at St. Joseph’s Oratory, and during her residency in Toronto, 1980-82, played at the University of Toronto and the Canadian National Exhibition. From 1990-2008, she coordinated the carillon program at the Cathedral of St. John the Evangelist in Spokane, Washington, where she also practiced family medicine. In 2006, she retired from medicine to continue her study of the carillon. She received a Bachelor of Music magna cum laude from the University of Denver in 2008. She has joined the faculty of Carleton University in Ottawa as instructor in the first carillon studies programme in Canada.

Dr. McCrady served for many years on the board of the Guild of Carillonneurs in North America (GCNA), as its president from 1987-88. Dr. McCrady is currently the co-chair of the Ronald Barnes Memorial Scholarship Fund, and chair of the Heritage Music Committee. From 1990 to 1996 she served as Secretary of the World Carillon Federation. She has played many recitals in Europe, North America, at international carillon festivals in Florida, Illinois, California and at the 2002 and 2014 congresses of the World Carillon Federation.

In her spare time, Dr. McCrady sings in the National Arts Centre Festival Chorus, enjoys New England contradancing, and explores the great Canadian outdoors by hiking, canoeing, and skiing with her dog, Steinway.