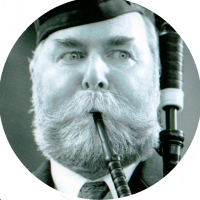 Brian is an award-winning piper whose early teachers were Sam Scott and Archie Cairns, and he drew significantly in his later development from James  McIntosh (MBE), Murray Henderson, Bill Gilmour, Scott MacAulay, and Colin MacLellan — all internationally recognized players with strong and deep traditional roots in bagpipe music.

Brian’s solo competitive piping career includes prize-winning performances at highland games across Canada, the US, and in the UK with appearances at the Argyllshire Gathering in Oban, the Northern Meeting in Inverness, and the Dunvegan Medal on Skye. He has toured extensively with both military and civilian pipe bands, performing at the Edinburgh Military Tattoo, the Tournament of Roses parade in Pasadena, Calif, on Parliament Hill, and at Rideau Hall. He has competed with pipe bands at all levels, winning 1stprizes at the Canadian, US, and North American Championships, as well as runner-up prizes at the World Pipe Band Championships.

Brian is a gifted and highly knowledgeable teacher whose private pupils have become award-winning soloists and pipe band members. He has also taught piping for the Saskatchewan Summer School of the Arts at Fort San, Sask., the Glengarry School of Piping and Drumming in Maxville, Ont, the Air Cadet League of Canada, and the Army Cadet League.

A certified judge for solo piping and pipe band competitions by the Pipers’ and Pipe Band Society of Ontario and the Eastern United States Pipe Band Association, Brian holds the Senior Certificate from the Institute of Piping, in addition to a B.Sc. (Geology) from Carleton University and a Technical Writing Diploma from Algonquin College.