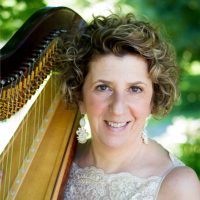 Caroline Léonardelli concert harpist and recording artist is a renowned soloist, chamber musician, and teacher.  Caroline’s solo recording El Dorado received a JUNO Award nomination in the category of Classical Album of the Year solo or small ensemble.  Her latest solo recording Impressions de France has been selected by Apple Music editors as one of ten harp recordings worldwide for their feature on the instrument.

Caroline has been described as a “World Class Harpist” in Harp Column Magazine, and her live performances have been reviewed as “Brilliant” and “Outstanding”.   Reviews of Caroline’s Impressions de France recording: “What she brings or adds to the music at hand, to any piece she plays, is close to magical” “She sees beyond the notes and recreates what the composer had in mind” Classical Music Sentinel. “It is her artistic sense of pacing and of shaping melodies within cascades of notes that help make these performances commanding.”  WholeNote Magazine.  “This is a French album for me like no other”, “warm touch, coupled with an articulate technique”  “thoughtfully chosen and laid-out repertoire, filled with surprises and all masterfully presented” Harp Column Magazine.  Caroline has released six recordings on her own label and has a worldwide digital distribution agreement with NAXOS

Caroline’s recordings and live performances have been featured on CBC Radio, NPR Classical 24 network and Classical stations throughout the USA, Canada, Europe and Asia.  Caroline’s live radio performances include interviews and performances on PBS/NPR radio’s Backstage Pass series.  Recently Caroline was featured on CBC National Radio show In Concert performing at the Women’s Musical Club of Toronto in solo performance and with the Afiara String Quartet.

Born in France, Caroline graduated with first prize in harp from the Paris Conservatoire under the guidance of Jacqueline Borot at the age of 18. After arriving in Canada Caroline completed an Artist Diploma at McGill University School of Music. During her youth, Caroline studied in France with Lily Laskine, one of the most celebrated harpists of the 20th century