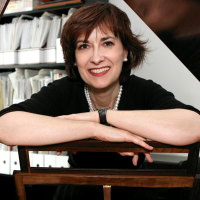 Ms. Desrosiers has appeared as guest soloist with the Saskatoon Symphony Orchestra, the Niagara Symphony, the Hamilton Philharmonic Orchestra, the Brandon University Orchestra and the McMaster University Chamber Orchestra. She has been featured at many prestigious Canadian festivals such as the Festival of the Sound, the Niagara International Chamber Music Festival and the Ottawa Chamber Music Festival, both as soloist and chamber musician. Established in Ottawa since 2009, she has been invited to present concerts in “ Les Plaisirs du Clavecin’’ and “ Les Concerts Ponticello” Concert Series (a Two-Harpsichords recital with Sonja Deunsch-Plourde), and contributed to the “Tribute to R. Murray Schafer” event during the 36th annual conference of the Society of American Music, hosted by Carleton University in 2010.

As a founding member of the trio “Terzetto” with flutist Robert Cram and oboist Lawrence Cherney, she had the opportunity to premiere specially commissioned works by Canadian composers such as Chan Ka Nin, James Rolfe, José Evangélista and Louis Applebaum. She also performed numerous recitals with Robert Cram, always offering a balanced mix of baroque and contemporary repertoire.

The promotion of the works of women composers was at the heart of many of Ms. Desrosiers’ concerts. Among others: a recital of harpsichord music by 18th century Austrian women composers as part of the international conference “Austria, 996-1996: Music in a Changing Society” (Ottawa), and concerts of women composers’ works with flutists Tina Fedeski and Lise Germain. She was also invited to give a lecture-recital entitled “Women Harpsichordists and 18th Century Feminist Thought: The Influence of François Couperin” at the international conference “Feminist Theory and Music II: A Continuing Dialogue” at the Eastman School of Music (Rochester, N.Y.), as well as at the Association of Canadian Universities Convention in Ottawa.

Cécile Desrosiers has been teaching university students since 1984 (University of Saskatchewan, Brock University, McMaster University, University of Ottawa, and Carleton University). She earned a reputation as an inspiring pedagogue, able to motivate students to exceed expectations. Many of her students have distinguish themselves at music festivals and piano competitions, have pursued graduate and post-graduate studies and are currently working as professional musicians in Canada and abroad.

Sought after as an adjudicator for music festivals across the country, she has served as jury member for music peer assessment committees, piano competitions and piano examinations in Canada and abroad (Ontario Arts Council, Hnatyshyn Foundation Competition, Conservatoire de Musique d’Orléans, France). She works as an examiner for Conservatory Canada.

She has been heard on WQXR-FM (New York) and on numerous CBC and Radio-Canada broadcasts. She performed on the soundtrack of the feature film “Gooby” with members of Sinfonia Toronto and the Toronto Symphony, and recorded two CDs, also with Sinfonia Toronto: “The Hollywood Flute”, and “Premieres” for Cambria Master Recordings.

Since 2016, she has participated to the International Conference “Classical: Next!” (Rotterdam, NE), leading to collaborations with composers from the Netherlands and with the Dutch Composers Association (Geneco) in preparation for future recitals. She is working closely with Canadian composers such as David Duke, Alain Gagnon, Aimé Dontigny and Jeff Morton, in preparation for upcoming performances that will include premieres of new works.

Her area of research focuses on Women and BIPOC Composers from the 18th Century to the early 20th, and her collaboration with Conservatory Canada led to the addition of more than 251 pieces by 60 women and BIPOC composers to their piano syllabus in 2021.