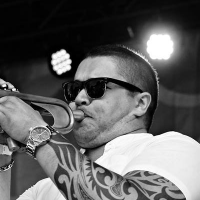 Edward Lister is a U.K born trumpeter, composer & educator who has been playing professionally since the age of 15. Edward graduated with a 2:1 BA Hons degree in Jazz performance & composition studies from Leeds College of Music (U.K). Edward has been based out of Ottawa, Canada since 2011 and currently runs 7 of his own ensembles as well as performing in a further 15. To date, Edward has recorded on over 30 albums in the Ottawa / Ontario region and has toured the globe and shared the stage with some of the best.

Since moving to Ottawa, Canada in 2011, Ed has performed and collaborated with a number of incredible North American musicians including Jann Arden, Sloan (Canadian rock legends), Jerry Granelli (Canadian drummer and composer who’s best known work is the Charlie Brown Christmas) and the Temptations (Motown legends). Ed is the director of the Carleton University Jazz Ensemble and also is the trumpet instructor for the Orkidstra organization. Ed has also created many projects that were made possible by the opportunities and creative spaces that this city provides. These projects include his 11 piece ‘Prime Rib Big Band’ which has performed over 50 shows in it’s 4 year existence including a standing monthly residency at the iconic ‘Irene’s Pub’ in Ottawa, a 7 piece hyper funk ensemble, 3 tribute shows including tributes to Sly & the Family Stone and Hall & Oates. Ed performs as a session musician in a further 15 bands and ensembles in Ottawa. Ed’s music has been featured many times over the last 8 years on CBC radio,CTV, Rogers T.V, Ottawa University CHUO & Carleton CKCU radio and the Ottawa Citizen to name a few. Ed is the director of Carleton’s Jazz Ensemble.