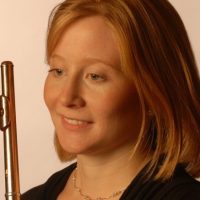 Born and raised in North Vancouver, Canada, Emily Marks first studied flute with Brenda Fedoruk, and Camille Churchfield, then principal flute of the Vancouver Symphony Orchestra. She graduated from McGill University with a BMus in flute performance with Distinction, where her teachers were Carolyn Christie and Timothy Hutchins of the Montreal Symphony Orchestra. Further studies were under the tutelage of Thomas Robertello at Indiana University. Emily was a member of the National Youth Orchestra of Canada, and toured Europe with the Jeunesses Musicales World Orchestra for three sessions. Additional summer studies were at the Banff Centre, the Orford Arts Centre, and performing with the National Academy Orchestra in Hamilton, Ont.

In 2002, Emily joined the National Arts Centre Orchestra in Ottawa where she held the position of Second Flute/ Piccolo for 13 seasons under the direction of Pinchas Zukerman.

She has served as an adjunct flute professor at The University of Ottawa, and is a Flute Performance Instructor at Carleton University. In addition to maintaining a private studio at home, she is the woodwind coach for the Ottawa Youth Orchestra and teaches for Orkidstra, a Sistema- inspired program providing music education to students in Ottawa’s under-served communities.