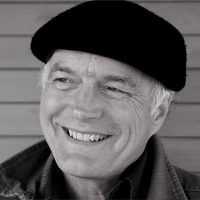 Ian Tamblyn has been a  musician since 1972. He has released 38 albums and cds of his own work as well as acting as producer for dozens of other artists.  . Ian  has also written fifteen plays and over one hundred theatre soundtracks. His most recent play is called A River Runs Through Us and the production enjoyed a successful tour of the Gatineau Hills during the summer of 2016. His play, Land of Trash is currently on tour throughout British Columbia in association with Green Thumb Theatre of Vancouver. As well, Ian enjoyed an acting debut in Jan Irwin’s production of Up to Low, based on an adaptation of Brian Doyles book where he was also musician and musical director. Currently Ian is working on a new play set again the Gatineau Hills entitled- A Summer- A Fair.

Mr. Tamblyn has received a number of awards and nominations. In 2012, Ian was made a fellow of the Royal Canadian Geographic Society for his guiding and creative  work in the Canadian Arctic. He has been awarded the Estelle Klein and Helen Verger Awards for his contributions to Canadian folk music; he has a honourary doctorate from Lakehead University, a Distinguished Alumni Award from Trent University and was voted English Songwriter of the Year in 2010 by the Canadian Folk Music Awards, amongst other awards and nominations in the music and theatre world.

Ian songs have been covered by numerous artists and there is a tribute album of his work entitled Coastline of our Dreams featuring artists like Lynn Miles, Susan Crowe , Hart Rouge and Valdy.

In the spring of 2014 Ian finished work on his CD, The Labrador, completing the last of his “Four Coast Project” .

During 2015 was chosen  writer in residence at Carleton University, teaching songwriting and composition to fourth year music  students . He  has recently released  CD-38, celebrating the Group of Seven,entitled Walking in the Footsteps, a project commissioned by the Art Gallery of Sudbury. In the fall of 2014 Ian was awarded the Galaxie Grand prize,  at the Ontario Folk awards for his song , “Away” from the recent The Labrador CD. In 2013 he won the Ontario Folk Award for best political song, “Take the Mountain Down.”

During the winter and spring of 2017 Ian will be teaching at Carleton University again and working towards CD 39. In the summer Ian will  resume  work with Adventure Canada and Students on Ice as a guide , host and educator.