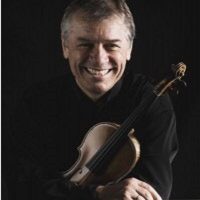 Ioan Harea (e-óne harea) left his native Romania to accept the position of associate concertmaster with the Municipal Symphony Orchestra of Caracas, Venezuela, a post that he held from 1979-1986, when he left Venezuela for Canada. A citizen of Canada, Venezuela and Romania, Ioan now resides in Ottawa, where he performs as a soloist, concertmaster and studio musician as well as maintaining his own teaching studio. He is the founder and leader of the Harea String Quartet and the Virtuosi Orchestra. He is on the faculty of the Crane School of Music, State University of New York, in Potsdam, New York.

A brilliant and versatile violinist, Ioan performs as a soloist and chamber musician in Canada, the United States, Venezuela, Italy, France, Romania and Spain. He has performed for very distinguished audiences, including Prime Ministers Jean Chrétien and Paul Martin, as well as George W. Bush, Vincente Fox, Helmut Schroeder and Vladimir Putin.

Ioan Harea has been acclaimed all across Canada for “Classic Gypsy,” a unique program of virtuoso classical favorites combined with Ioan’s exclusive arrangements of “gypsy” music, tangos and jazz, accompanied by orchestra, string quintet or piano.

Ioan has performed “Classic Gypsy” in Canada with the symphonies of Kamloops, Kootenays, Okanagan, Cranbrooke, Prince George, North Bay, Sudbury, Peterborough, Ottawa and Sault Ste. Marie as well as with the International and York Symphonies, the Hamilton Philharmonic, the Vivace Touring Orchestra, and L’Orchestre de Chambre de Hull, Quebec. He has toured “Classic Gypsy” in recital with piano in seventeen cities in Ontario, eight cities in British Columbia, in Winnepeg, Manitoba, and in Gatineau, Quebec.

Ioan Harea has recorded six CDs: Ballade (violin and piano), Classic Gypsy (violin and symphony orchestra), Sentimental Strings (string quartet), Versatility (various instruments in duo with violin), Alegria and Unaccompanied (solo violin), all of which show the wide range of styles in which Ioan performs. Unaccompanied was chosen by Richard Todd, arts critic for The Ottawa Citizen, as a 2005 “Best Buy” for classical recordings.

Ioan Harea is the featured artist in the biannual Virtuosi Productions Concert Series at the National Arts Centre in Ottawa.