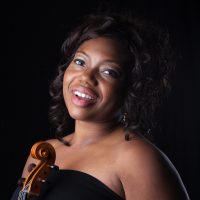 Loop pedal violist, composer, and arranger Kathryn Patricia Cobbler has crafted a singular niche in improvisation and classical performance. She obsesses over creating uniquely arresting soundscapes, whether in solo recitals, composing for theatre, performing in site specific art installations, and more. Recognized as an in-demand artist, she has been featured in Canada’s capital region’s most notable Concert Series, including Music & Beyond, the Shenkman Arts Centre, Music at Southminster, and the Ottawa New Music Creators’ Analogue Series to name a few.

​As a seasoned performer and educator, Kathryn is proud to be a Teaching Artist Facilitator for the El Sistema-inspired program ​OrKidstra ​and on the ​MASC Artist roster​. As a composer, Kathryn has been featured in Boston based Concert series, ​Castle of Our Skin’s ​Black Composers Miniature Challenge, which resulted in the world premier of her piece A Home Called ‘Wander’. She has also been known to collaborate with other composers, and artists of multiple disciplines, premiering pieces by Canadian composers Mika Posen, and Raphael Weinroth-Browne. Most recently Kathryn Patricia was artist in residence with the Ottawa Dance Directive composing and collaborating for the premiere of Dream & True North envisioned and choreographed by Elizabeth Emond-Stevenson.

​Initially a visual artist, Kathryn sees the world through shape and line—a vision that has laid the groundwork for many of her musical creative projects. Kathryn’s current explorations of the loop pedal have led to the development of her workshop/concert, Sound In Living Colour, where she draws connection between the technical use of the paint brush and her viola bow; guiding her listeners through a music inspired painting experience. After switching to music as her artistic path, she would receive degrees in viola performance from Western University (B.M.) and the University of Ottawa (M.M.). Ms. Cobbler has also performed as an orchestral musician, appearing within the Toronto Symphony’s Trans-Siberian Orchestra, Ottawa Symphony Orchestra, and the Ottawa Jazz Orchestra. A native of Windsor, Ontario, she makes her home in Ottawa. She performs on a viola by luthier, Sibylle Ruppert and a Boss RC-30 loop pedal. ​