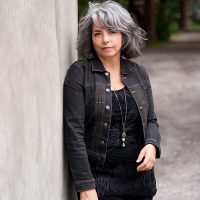 Lynn Miles is one of Canada’s most accomplished singer/songwriters. With thirteen albums to her credit, the winner of the 2002 Juno award for Roots and Traditional Solo Album of the Year and multiple Canadian Folk Music awards including the latest 2013 “Solo Artist of The Year” for her CD “Downpour” and 2011 “English Songwriter of the Year”.

Her song “Black Flowers” is on the 2017 Grammy Nominated “North By South” album by Claire Lynch. Her song “Three Chords and the Truth” is include in the BBC TV show “Case Histories”

Lynn has produced several CD’s for fellow artists, including singer/songwriter Lynne Hanson’s “River Of Sand” Album, and “Seven Deadly Spins” which have both received glowing reviews, the “Yukon Women in Music” Cd.

Lynn also wrote and arranged her winter music show “Songs For The Longest Night” with she performed with a string quartet at the National Arts Centre  December 2014, and has turned into her latest CD release “Winter”.

In 2013 Lynn was nominated for an Edmonton Theatre Sterling Award for best musical score.

Lynn is an instructor in Carleton University’s popular music program.

Lynn has toured and continues to tour across North American, Great Britain and Europe. She has a European record deal with CRS records in the Netherlands.