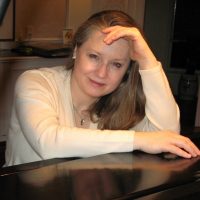 Native of Ottawa, Nicole Presentey began studying the piano at age four.  She made her recital debut several years later in Ottawa and then in Toronto at Heintzman Hall and the Royal Conservatory of Music where she was a full scholarship student. She made her orchestral debut at age twelve performing Mozart Piano Concerto K271 with the Ottawa Symphony Orchestra.  Recipient of numerous prizes in Canada, she went on to compete successfully in several international music competitions, including the prestigious Royal Overseas League Competition which gave her the opportunity to play at Queen Elizabeth Hall in London as well as the honour of being presented to Queen Elizabeth II. Her performances as a soloist, chamber musician and duo pianist have been heard in this country, the United States, Europe and Scandinavia.  Radio-Canada, the Canadian Broadcasting Corporation and Radio Italia have recorded her concerts for broadcast, and she has made numerous television appearances on several Canadian networks.

After receiving her early musical training in Ottawa and Toronto, Nicole Presentey entered the Vincent d’Indy School in Montreal at age fifteen and graduated with a BMus specializing in piano performance, which was followed by graduate studies at the Université de Montréal.  Her teachers included Yvonne Hubert, Natalie Pepin, Beveridge Webster and Sister Kathleen Devlin. She also participated in master classes with Monique de la Bruchollerie, Guido Agosti, Bela Nagy, Luiz de Moura Castro, Helena Costa, Konrad Wolff and Gyorgy Sebok. In 1979 she was invited by Maria Curcio, renowned pupil of Artur Schnabel to study privately with her in London, England. With the support of the Canada Council, she remained with Curcio for three years, perfecting her art until family circumstances required a sudden return home. The unexpected passing of her father catapulted her into the world of high-tech, and she became CEO of the family business, a successful company operating in the field of information security and meteorological instrumentation.

Her performances are now rare but sought after, and have elicited praise from critics such as Jacob Siskind: “Presentey seemed at one with the spirit of Schubert…giving the melodic lines a sense of effortless freedom rarely encountered, making the drama under the surface of the melodies bubble and ferment without disturbing the line… These were performances of the very highest calibre, musically and emotionally…soaring effortlessly far above the general level…spontaneous music-making of the very highest order.” Eric Dawson described her performance of the Grieg Piano Concerto at the National Arts Centre at age sixteen: “She took an overplayed warhorse and returned to it all the sparkle and verve we had forgotten it contained. Her playing was beyond praise. Every movement spoke of her involvement with the music and her command of the most difficult passages was nothing short of amazing. She has all the presence and style of the great romantic artists we now can only read about.”

Currently living in Ottawa, Nicole Presentey maintains an active private piano studio. In 2001 she joined Carleton University’s School for Studies in Art and Culture: Music where she is an Associate Piano Performance (Classical) Faculty Member. In 2003 she founded and continues to direct the Carleton University Chamber Music Ensembles. Taking into account the wide-ranging repertoire offered by the Carleton University library, her ensembles present twice yearly concerts featuring music from the 16thcentury to the present day, with an emphasis on stylistic integrity, historical understanding and natural expression. Regular inclusion of new work by up-and-coming young composers is an ongoing goal of the program.

Her chamber music background is wide-ranging and began at an early age. She studied cello with Joyce Sands and performed for a number of years with the Ottawa Board of Education Orchestra where she was on first desk. The OBE recorder ensembles gave her years of performing experience in the baroque repertoire playing tenor and bass recorder. Her studies in chamber music were furthered during her university years where she also gained experience in vocal accompaniment and coaching. Studying under Maria Curcio, the renowned coach of Peter Pears and Benjamin Britten and partner of Elizabeth Schwarzkopf allowed her to further expand her understanding of the role of the pianist in vocal ensemble playing. Upon her return to Canada in 1982 she formed a piano trio including partners John Gaszi and Pavel Symczyk-Marjanovic. Upon the sudden passing of John Gaszi, violinist Evelyn Chadwick joined the trio and the ensemble gave numerous concerts in the NCR. She has also performed over the years as a duo pianist with several notable partners, including Claude Labelle with whom she gave concerts for the CBC in the late 1990’s and most recently in 2018 at Chamberfest with James Parker. In 2019 she was involved in recording “Escape”, a cello sonata composed and performed by Anita Pari for a CD that was sponsored by Carleton University and performed at Chamberfest 2019.

In 2016 Nicole Presentey was designated a Royal Conservatory Certified Teacher, specializing in elementary, intermediate and advanced piano. She is a member in good standing of the Ontario Music Teachers Association, Ottawa branch, as a bilingual teacher of piano, solfege and theoretical subjects. Part of her extensive practice is devoted to reducing muscular pain and stress caused by overwork and misunderstanding of the mechanics of piano-playing. Her ongoing goal is to assist students gain freedom in music-making.

Nicole Presentey is sought after as an adjudicator and clinician, soloist, collaborative pianist and chamber musician.  Many of her students have pursued graduate and post-graduate studies in music, achieving successful careers as soloists, orchestral musicians, chamber players, composers and teachers. For her numerous students, many of whom achieved the highest national recognition of excellence but who chose to pursue other careers, the love of music continues to sustain and nourish them and their children, hopefully adding to the audience of the future.

Nicole’s involvement with Ottawa Chamberfest as an Artistic Advisor fulfils her desire to support and nurture young talent and in 2007, she initiated and continues to produce Rising Stars, a component of the annual festival that showcases up and coming musicians from the National Capital Region. Many alumni who received their start on this important local platform have gone on to pursue careers on the national and international scene.

A graduate of the Tafelmusik Baroque Summer Institute, Nicole has performed as continuo on numerous occasions in various Toronto venues and continues to pursue further studies in early music.