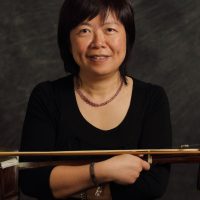 Patty Chan is a second generation Chinese Canadian erhu musician, educator, and
author. She is the Music Director of the Toronto Chinese Orchestra, Co-Founder of the cross- cultural PhoeNX Ensemble, and Director of Centre for Music Innovations (musinno.com).

As an erhu musician, Patty has collaborated with many ensembles and organizations, including the Strings of St. John’s, Red Snow Collective, the Toronto Masque Theatre, and the Canadian Children’s Opera Company. She has performed in world premieres of theatre/opera productions such as Red Snow (2012), The Lesson of Da Ji (2013), Comfort (2016), and The Monkiest King (2018). Patty’s composition, Redemption: The Chan Kol Nidre (2015) for erhu and viola da gamba has been added to the archives at the Beit Hatfutsot in Tel Aviv, a museum for the Jewish people.

Patty has taught erhu and Chinese music at York University, Ryerson University, and
Carleton University. She has led and participated in music exchanges and tours in Canada and Asia. Patty has written several books about the erhu that have sold in over 30 countries, and a storybook in three languages about Chinese instruments for children. She is currently creating a Chinese music database for English readers at the Centre for Music Innovations in partnership with the Little Giant Chinese Chamber Orchestra in Taiwan. Her focus continues to be forging cultural connections through music.