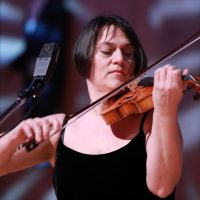 Ralitsa Tcholakova is an internationally known, Ottawa-based violin/viola player.  She has performed as soloist with orchestras, at chamber music series and festivals in over 25 countries. She is the recipient of bursaries, scholarships, awards and grants from Ottawa City Arts Funding, FACTOR, SOCAN Foundation, Canada Arts Council, Department of Foreign Affairs of Canada, Europe 2000 and many others. In 2017 she was nominated  for the GG’s Persons Case award. Ralitsa has recorded numerous highly acclaimed CDs, including “Ballad of the North,” consisting of music by Canadian women composers and distributed by SOCAN to 135 radio stations worldwide. Her latest CD “Aboriginal Inspirations” features Grammy nominee flautist Ron Korb. It is released and promoted nationally and internationally by the Canadian Music Centre and NAXOS. She is currently working on CD with violin concertos by Canadian Women Composers funded by various Canadian organizations. Since 2014 she performs annual recitals and solo concert performances on Parliament Hill. In 2016 she played two duets with the Hon. Ed Fast (including one of Fast’s own compositions) at the inaugural concert “Spirit of Change” at the Canadian Senate. Ralitsa is a music performance instructor at Carleton University and at the City of Ottawa.  She is currently nominated for the Premiere’s Award for Excellence in the Arts.