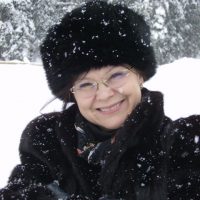 Susan Blyth-Schofield began her varied career as a performer in opera, operetta, and musical theatre across Canada and in Europe with such companies as The Canadian Opera Company, Opera Lyra Ottawa, Comus Music Theatre, Toronto Operetta Theatre, and Festival Estival. Chamber opera has always had a special appeal for Susan, and she is proud to have had the opportunity to create three roles in that genre: Baby (Baby), The Judge (Space Opera), and Sally (Killing Time). No stranger to the concert stage, she has performed numerous recitals in Toronto, Vancouver, Washington, D.C., London, Brussels, and other Canadian and European cities. Closer to home she has performed at The National Arts Centre, as a soloist with the Musica Viva Singers, in Opera Gelato, in the Opera in Piazza concerts during Italian Week, with the Ceremonial Band of The Governor General’s Foot Guards, at Rideau Hall, and in recital at the residence of the British High Commissioner. A number of her performances have been heard on CBC Radio and seen on Belgian and Canadian television.

Susan is passionate about teaching and has maintained a private vocal studio for over thirty years in Ottawa, Toronto, Brussels, Geneva, and London. Her students range from professional (classical and musical theatre singers, actors, and dancers), to aspiring high school students, to amateur performers. She joined Carleton Music as a performance instructor in 2002, and now also lectures in the History of Musical Theatre and is the director of the University’s Musical Theatre Ensemble. She holds a Master’s in Performance Studies from City University and the Guild Hall (London, England), a Bachelor of Music in Performance from The University of Toronto, and is an Associate of The Royal Conservatory of Music, Toronto. Susan is a member of The National Association of Teachers of Singing (currently serving as both the Quebec District Governor and the President of the National Capital Region Chapter), The Ontario Registered Music Teachers’ Association, Canadian Actors’ Equity Association, and The Association of Canadian Television and Radio Artists. In addition to her one-on-one teaching, Susan is also a sought-after vocal adjudicator and gives frequent workshops and masterclasses on acting for singers, interpretation, and performance anxiety.

Behind the scenes, Susan has worked most often as a stage director of opera and musical theatre, although she has been known to turn her hand to stage management from time to time. Her directing credits include work for Carleton’s Musical Theatre Ensemble, Theatrical Adventures Ottawa, Opera Lyra Ottawa, Ooh La La Opera, The Ottawa School of Speech and Drama, Music Unlimited (Brussels), The Queen Elizabeth Dinner Theatre (Toronto) and Between Friends Music Theatre, Kitchener/Waterloo.