Carleton University has long been among Canada’s leading centres for scholarship on Canadian cultural heritage.

The option to pursue Celtic instrument studies within the context of the BMus degree opens a new area of performance focus to both Canadian and International music students, and contributes to Carleton’s recognition of the cultural and historical significance of Canada’s fiddling, piping and Celtic song traditions.

The Celtic music program focuses on instrumental performance. Your course load every term includes 20% performance studies on your instrument – a weekly one-on-one lesson with the performance instructor to expand your knowledge of your instrument and its music, increase your repertoire, and improve your performing ability.

But the Celtic music program is much more. As a music degree (not just a Celtic instrument degree) you will also do broader musical studies, with courses in general music theory, music history and musicology, ensemble performance (in choir or other instrumental and vocal ensembles), and a variety of other topics.

From the parlours of the Maritimes to the outports of Newfoundland, from the communities of the Northern Cree and Métis peoples to the logging camps of Québec and Ontario, fiddling has been a central thread in the fabric of Canadian musical culture for centuries. Carleton University continues its tradition of academic and musical innovation in announcing the first post-secondary Fiddle Studies program in Canada. Located at the crossroads of Québécois, Ottawa Valley, Irish, and Scottish fiddle traditions and with a reputation as a leading centre for studies in Canadian music, Carleton is ideally situated to offer such a program and will draw upon the experience of some the finest practitioners in the country including Denis Lanctôt. Denis Lanctôt is a “fiddler’s fiddler”. Born in Québec and residing in Ottawa, Denis is a highly accomplished self-taught musician and instructor who is equally at home as a fiddler or accompanist. Denis developed his own unique fiddling style under the influence of three of the twentieth century’s most legendary fiddlers: Sean McGuire (Ireland), James Scott Skinner (Scotland) and the legendary “Ti” Jean Carignan (Québec), with whom he played on several occasions. Winner of more than one hundred fiddling awards, he is known throughout North America for the lyrical “voice” that he extracts from his violin, and for the extraordinary signature of his bowing technique. (www.denislanctot.com)

Ellen MacIsaac  holds a PhD in Ethnomusicology from National University, Dublin, Ireland, where she learned the Irish traditional singing style and repertoire. In 2012 she won first place in the sean-nós (old style) Irish singing competition at the Oireachtas Gaeilge Cheanada, and in 2013 she represented Canada at an tOireachtas na Samhna festival in Ireland. Ellen MacIsaac teaches a course titled “Music of the Celtic Peoples” at the University of Ottawa, and she is the creator and director of the Ottawa Celtic Choir.

Susan Toman is a versatile and engaging musician who divides her time between the harpsichord and Celtic harp. Prize winner at the 2007 Brugge International Harpsichord Competition, she has also received several grants from the Canada Council for the Arts. Susan holds a Doctorate from McGill University (harpsichord) and a Masters from the University of Michigan (piano, harpsichord, fortepiano). After completing her Doctorate, she pursued intensive studies on the Celtic harp with Grainne Hambly in County Mayo, Ireland. Susan is the founder and Artistic Director of Seraphina and La Compagnie Baroque Mont-Royal (CBMR). Seraphina performs both Baroque and Celtic music of the 17th and 18th centuries, while CBMR produces Baroque operas in Montreal. At ease in both the orchestral and chamber music settings, Susan has performed at the Bloomington, London, Montreal, and Rochester early music festivals, as well as with ensembles Notturna, La Cigale, and with members of the Montreal Symphony Orchestra on their series Serenata St.Jean. She particularly enjoys giving house concerts, which allow for greater interaction between the performer and audience. Her discography includes J.P.Rameau’s Nouvelles suites de clavecin (2008) and Seraphina’s album Road to the Isles (2011). In addition to teaching at Carleton University, Susan is adjunct faculty at Greenville College, Illinois, for whom she teaches online courses.

The music of the Great Highland Bagpipe is both a historical part of Canada’s traditional music and a living musical genre. Carleton’s piping curriculum encompasses both solo and band playing, and provides the developing piper with a broad range of piping knowledge and experience. Your piping studies will develop your playing skills and repertoire for your preferred performance form: as a solo competitor, in a ceremonial or competing pipe band, or in a folk ensemble. Studies cover both light music and ceol mor. 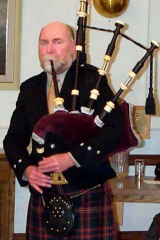 Brian Williamson is the current GHB performance instructor. Brian has been a prize-winning solo competitor at highland games across Canada, the US, and in the UK, and has played with both military ceremonial and civilian competing pipe bands. He is an experienced teacher whose past pupils have become award-winning soloists and pipe band members. He actively judges solo piping and pipe band competitions (certified to judge by the Pipers’ and Pipe Band Society of Ontario and the Eastern United States Pipe Band Association), and holds the Senior Certificate from the Institute of Piping.