Everyone thinks of the world and their place in it in a unique way. Within everyone’s unique perspective, however, there are certain basic, very general ideas that we all share — ideas such as those of the self, personhood, knowledge, truth, reality, time, causality, nature, the supernatural, mind, language, action, skill, freedom, art, happiness, the good life, morality, responsibility, love, friendship, and society.

Rarely do we get the opportunity to reflect on these general ideas, to ask ourselves what they involve and whether they are appropriate bases for thinking about the world and our place in it. Philosophy, however, provides us with just this opportunity, for philosophy is the academic discipline that is specially dedicated to exploring and assessing the most general ideas in terms of which we think about the world and our place in it. This is what the ancient Greeks meant when they conceived of philosophy as the pursuit (or “love,” philo-) of reflective insight (or “wisdom,” sophia).

The study of logic plays an important role in philosophy because the study of logic teaches us how to reason well about — hence how properly to explore and assess — ideas. The history of the discipline also plays an important role in philosophy, because it is often by reflecting on the insights (and insightful mistakes) of great past thinkers that we are inspired to come up with our own insights in the exploration and assessment of ideas. 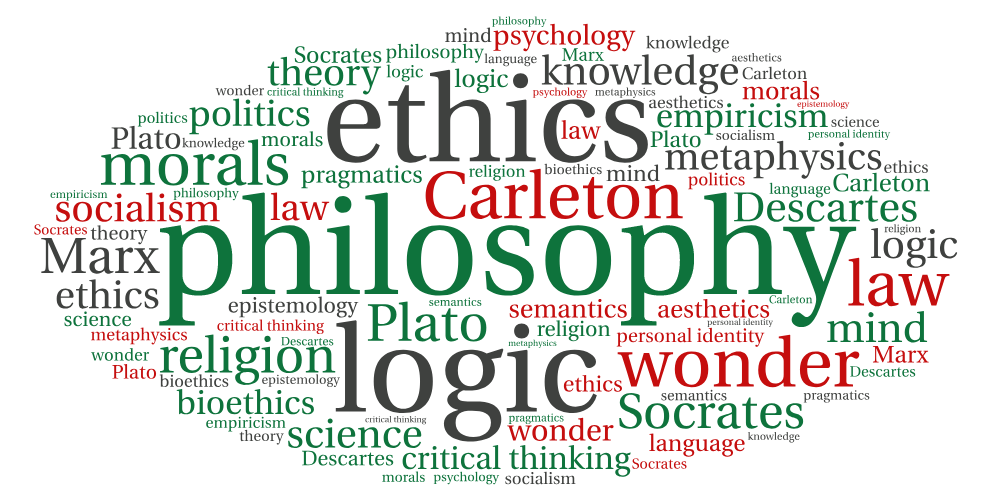 Try one of our introductory philosophy courses without prerequisites included:

PHIL 1000 [0.5 credit]
Introductory Philosophy: Fields, Figures and Problems
What is metaphysics? Who was Socrates? What is Freedom? This introduction sketches many branches of philosophy and the important problems associated with each. It introduces great philosophers, present and past, and traces enduring philosophical themes.

Precludes additional credit for FYSM 1208 (no longer offered), FYSM 1211 and PHIL 1100. This course is not suitable for students with previous formal study of philosophy.

PHIL 1200 [0.5 credit]
The Meaning of Life
An introduction to concerns expressed by the perennial philosophical question, “What is the meaning of life?” Students will be familiarized with the major philosophical approaches to life’s meaning through a consideration of various contemporary and late modern works in the philosophy of life.

PHIL 1301 [0.5 credit]
Mind, World, and Knowledge
Introduction to a variety of philosophical works, including contemporary, on such topics as: the nature of being, the mental, the external, consciousness, perception, experience, meaning, truth, the nature of knowledge, scientific understanding, and how language and thought represent the world.

PHIL 1700: Philosophy of Love and Sex

PHIL 1700 [0.5 credit]
Philosophy of Love and Sex
A survey of philosophical classics, on themes of romantic love, self-love, altruistic love, sexuality, eroticism and the passion/reason dichotomy, from Plato’s Symposium to Foucault’s History of Sexuality; and an examination of related contemporary issues in light of these perspectives.

FYSM 1210 [0.5 credit]
First Year Seminar, Special Topics
Selected topics in the study of philosophy. Topics offered may vary from year to year and will be announced in advance of the registration period by the Department of Philosophy.

PHIL 2001 [0.5 credit]
Introduction to Symbolic Logic
An introduction to the techniques and philosophical implications of formal logic with emphasis on translation of expressions into symbolic form, testing for logical correctness, the formulation and application of rules of inference, and the relation between logic and language.

PHIL 2003 [0.5 credit]
Critical Thinking
Assessment of reasoning and the development of cogent patterns of thinking. Reference to formal logic is minimal. Practice in criticizing examples of reasoning and in formulating one’s own reasons correctly and clearly.

PHIL 2330 [0.5 credit]
Happiness, Well-being, and the Good Life
A philosophical exploration of what makes a good human life. Topics may include the role of happiness, well-being, and flourishing in a good life, the relations between these aspects, and the extent to which they depend on luck and social considerations

PHIL 2340 [0.5 credit]
Philosophy and Popular Culture
Philosophy is all around us, it permeates culture. This course explores philosophical questions through the lens of popular culture. The material used may include films, shows, music, novels, video games, advertising, comic books, and so on.

PHIL 2380 [0.5 credit]
Introduction to Environmental Ethics
Major questions in environmental ethics: How should human beings view their relationship to the rest of nature? Is responsible stewardship of the environment compatible with current technology? Must future generations be protected? Do animals, other life forms, endangered species, ecosystems and/or the biosphere have value/rights?

PHIL 2807 [0.5 credit]
Philosophy of Art
Philosophical approaches to the study of art. Topics such as: the nature of art and artistic value; representation and symbolism in art; art and artifice; art and the emotions; art, culture and ideology; post-structuralism and art; theories of creativity; relationship between artworks and audiences.