Congratulations to Blake Barkely on his recent successful PhD dissertation defence. His thesis is entitled “Revisiting the Politics of Asylum in Africa: Explaining Kenya’s Sub-National Policy Variation” and his supervisor is James Milner. 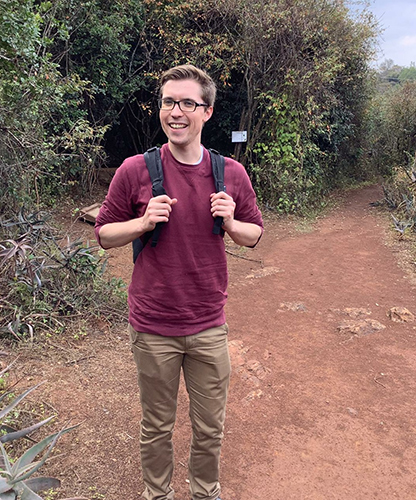 “My PhD research focused on addressing how the politics of asylum in Africa have changed in recent years as different refugee hosting countries in Africa have taken increasingly different approaches from one another in their responses to refugees. In conducting the research for this project, I was extremely fortunate to be able to conduct fieldwork in Kenya prior to the COVID-19 pandemic. Using the case of Kenya, I illustrate that the politics of asylum have not only diverged between states, but also within them.

Kenya possesses three major refugee hosting areas with distinct geographies and political responses to refugees: the Dadaab refugee camps in Garissa County, the Kakuma refugee camps and the Kalobeyei Integrated Settlement in Turkana County, and the urban refugee population in Kenya’s Capital City, Nairobi. Kenya’s has hosted hundreds of thousands of refugees in both camps and within urban centres for the last three decades, over that time policy approaches between these regions have diverged to make way for significant internal variation.

I argue that Kenya’s internal policy variation has been facilitated, at least in part, by the introduction of the 2010 Constitution and the introduction of devolved governance to the country. Replacing the previous highly centralized political structure with democratically accountable county governments has affected the political calculus of local elites, creating space for more diverse policy options. As the scope of what is politically possible widens, so too does the potential for mutually beneficial outcomes that support both the refugee and local host populations. In addition to changes in the Kenya’s overarching political structure, I found that additional factors unique to each major refugee hosting area, influenced which policy options were available to sub-national governments. These included the level of involvement from the central government, refugee population demographics, and the development of local political opportunity structures.”