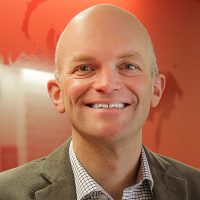 Achim Hurrelmann (Dipl.-Pol. University of Hamburg, 2000; Dr. rer. pol. University of Bremen, 2004) is Professor of Political Science and currently serves as Chair of the Department. He is Co-Director (with Joan DeBardeleben) of the Centre for European Studies (CES), a Carleton University Research Centre. He is cross-appointed to the Institute of European, Russian and Eurasian Studies (EURUS).

Achim’s scholarly work focuses on the politics of the European Union. He is particularly interested in political discourses about European integration (in parliaments, the media, and among citizens), democracy and legitimacy in the EU, as well as Canada-Europe relations. With Emmanuel Brunet-Jailly and Amy Verdun, he has published European Union Governance and Policy Making: A Canadian Perspective (University of Toronto Press 2018), the first textbook on EU politics focused explicitly on a Canadian readership. His research articles have appeared in some of the leading journals in the field, including European Journal of Political Research, West European Politics, Journal of European Public Policy, and Journal of European Integration.

Achim has been awarded several research grants from the Social Sciences and Humanities Research Council of Canada (SSHRC) and other granting agencies. In cooperation with Petra Dolata, Patrick Leblond, and Frédéric Mérand, he currently works on a project that examines “The Reconfiguration of Canada-Europe Relations after Brexit”, supported by a SSHRC Insight Grant (2019-2024). As applicant or co-applicant, he has also been awarded various grants to support the Centre for European Studies, including most recently funding from the EU’s Erasmus+ Programme for the Jean Monnet Network on Transatlantic Trade Politics (2020-2023).

The main fields of Achim’s teaching are EU politics, comparative politics (with a focus on Europe), as well as democratic and state theory. He has taught introductory courses in the fields of Political Science and European, Russian and Eurasian Studies. He has won several teaching awards, including the Faculty of Public Affairs Teaching Award (2011), the Carleton University Excellence in Blended and Online Teaching Award (2019), and the Carleton University Student Association Teaching Excellence Award (2021).

‘Eurosphere or Anglosphere? Canadian Public Opinion on Brexit and the Future of Transatlantic Relations’, Canadian Journal of Political Science, Vol. 54, No. 3 (2021), 571-592 (co-authored with Frédéric Mérand and Stephen E. White).