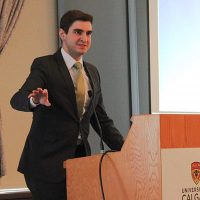 Kiernan McClelland is a PhD student in Political Science at Carleton University working under the supervision of Dr. Elinor C. Sloan. Kiernan’s research focuses on the strategic application of space power by Canada in the 21st century, the impact of anti-satellite technologies on modern military strategy, and the politics of planetary defence and planetary colonization.

Kiernan received a Master of Strategic Studies from the Centre for Military, Security and Strategic Studies at the University of Calgary. His MSS thesis, titled “A Canadian Space Odyssey: Canada, the Great Space Powers, and the Space Power Dilemma”, which analyzed the inactivity of sustained strategic space operations by Canada from 1962 to 1996.  He also is an alumnus of Carleton University and has a Bachelor of Arts (Honours) with High Distinction. The topic of his undergraduate honours thesis, “Rods from God: The Practicality of Kinetic-Energy Space-To-Earth Weapons in Modern Warfare” assessed the utility of developing space-to-earth weapons for the national space policies of the United States, China, and Russia.

A regular contributor to space power discussions, Kiernan has presented at a number of national and international academic and government-funded conferences on contemporary security issues including Canadian aerospace defence, satellite technology vulnerabilities, space weapons, and international affairs. In 2016, Kiernan published a proceedings paper entitled “The Space Oddity: Canada, the Revolution in Military Affairs, and the Space Power Dilemma” through the Canadian Space Society (CSS).