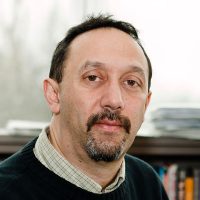 Jeff Sahadeo received his PhD from the University of Illinois, Urbana-Champaign, in 2000. He joined Carleton after three years teaching at the University of Tennessee-Knoxville. His teaching interests include diaspora, migration, and empire in Eastern Europe and Asia. He also works on issues of colonialism, nationality, frontiers, and borders in relations of power and the creation of identities and states. A specialist on the Caucasus and Central Asia, Dr. Sahadeo has conducted extensive work in several countries of the region.

Dr. Sahadeo’s current research focuses on the intersection between nature and society, movement and social change through a study of rivers in the Republic of Georgia. He is also researching post-conflict peacebuilding through pluralism in Eurasia.

“History, Memory and the Quest for Conflict Resolution in Southern Kyrgyzstan and the Ferghana Valley” In Interrogating Liberal Peace in Eurasia: Critical Perspectives on Peace and Conflict. Ed. Catherine Owen, Shairbek Juraev and Nicholas Megoran (London: Rowman and Littlefield, 2018), 25-54.

Podcast hosted by Cornell University Press:
“We spoke to Jeff about his research on the Soviet Era migration of people from the Caucasus and Central Asia into Leningrad and Moscow, how the Soviet concept of the “friendship of peoples” worked and didn’t work, and the rewards and challenges Jeff faced basing his book on oral histories”