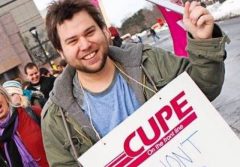 Mat Nelson at a CUPE demonstration

The Mathew Nelson Memorial Award is presented each year to an outstanding (M.A or Collaborative PhD) student at the Institute of Political Economy. Mat Nelson was an inspiration to his many colleagues and friends. Mat was an activist who unwaveringly deplored violence, racism, and inequality. He passionately helped advance the collective struggle for social, economic and human rights. Mat’s many accomplishments included his service as President of CUPE 4600, Carleton University’s union for teaching assistants and contract instructors. Mat also served as President of the Ottawa CUPE District Council. The student chosen to receive this award in Mat’s honour must also share a passion for social justice and activism. 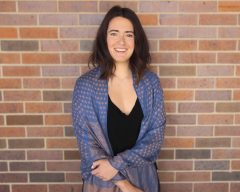 This year, the recipient of the 2019 Mathew Nelson Memorial Award is Jesse Whattam. Jesse is in the second year of her M.A, and came to the Institute of Political Economy after completing an undergraduate degree at Trent, where Mat also received his bachelor’s degree. Last summer Jesse worked as a researcher for CUPW and the Canadian Centre for Policy Alternatives. This spring, Jesse was elected Vice-President (Finance) of the Graduate Students’ Association for the upcoming academic year.

“Jesse is one of those wonderful students who is always first to volunteer to pitch in,” describes Donna Coghill, Institute Administrator, “whether it’s organizing a conference, a student mixer, or a rally. Jesse is a tireless activist for social justice issues, with causes ranging from indigenous rights, to fair wages, anti-racism, and immigration, to name a few.” Jesse is currently working on her thesis with the Director of the Institute, Cristina Rojas, tentatively titled “The Possibilities of Transforming Canadian Settler Consciousness: Settler Responsibility and Community Spaces.”

Jesse has been working with two Ottawa-based church community groups comprised of predominately settler individuals that are trying to challenge the power imbalance and transform relations between settlers and Indigenous peoples. According to Jesse, “It is my hope that this project will facilitate a deeper understanding of the work that needs to be done by settler Canadians in order to challenge settler colonial relations and structures that continues to systematically benefit settlers while destructively marginalizing Indigenous communities.”

Similarly, Mat’s own academic research focused on structural inequalities in Canada. His last great accomplishment was his doctoral thesis entitled “Race, War, and Bio-Power: A Political Genealogy of State Racism in Canada.” Although Mat passed away before his thesis defence, his doctoral degree was conferred posthumously on June 8, 2017.